Individuals have been calling on social media for the assassination of U.S. Supreme Court Justice Clarence Thomas after he issued a separate concurring opinion on Friday in a ruling that struck down Roe v. Wade. Abortion activists have also published his home address, and others have called to burn down the Supreme Court.

The U.S. Supreme Court overturned two landmark abortion cases, Roe v. Wade and Planned Parenthood v. Casey, returning the legality of abortion to the states. Justice Samuel Alito wrote for the majority and Justice Thomas wrote a solo concurring opinion in which he argued that the Supreme Court should also reconsider rulings on contraception, same-sex relationships and marriage.

Since then, individuals on social media have called for Thomas to be assassinated. This comes after one California man who attempted to kill Justice Brett Kavanaugh was arrested and charged.

It also comes after other groups have called for violence to be committed against pro-life groups, individuals and churches. In response, the FBI announced it was investigating such threats and Congress passed a bill that President Joe Biden signed into law extending protections to members of the justices families.

On Friday, Thomas wrote the court “correctly holds that there is no constitutional right to abortion. Respondents invoke one source for that right: the Fourteenth Amendment’s guarantee that no State shall ‘deprive any person of life, liberty, or property without due process of law.”

He issued a separate opinion, he explained, “to emphasize a second, more fundamental reason why there is no abortion guarantee lurking in the Due Process Clause. … Considerable historical evidence indicates that ‘due process of law’ merely required executive and judicial actors to comply with legislative enactments and the common law when depriving a person of life, liberty, or property.”

Because “any substantive due process decision is ‘demonstrably erroneous,” he argued.

Several of the threats posted on Twitter have been taken down; some have not. The Center Square obtained screen shots of the ones listed below; there are others.

Another, Markus @yikesrus, tweeted, “Today is a great day to assassinate Clarence Thomas.” 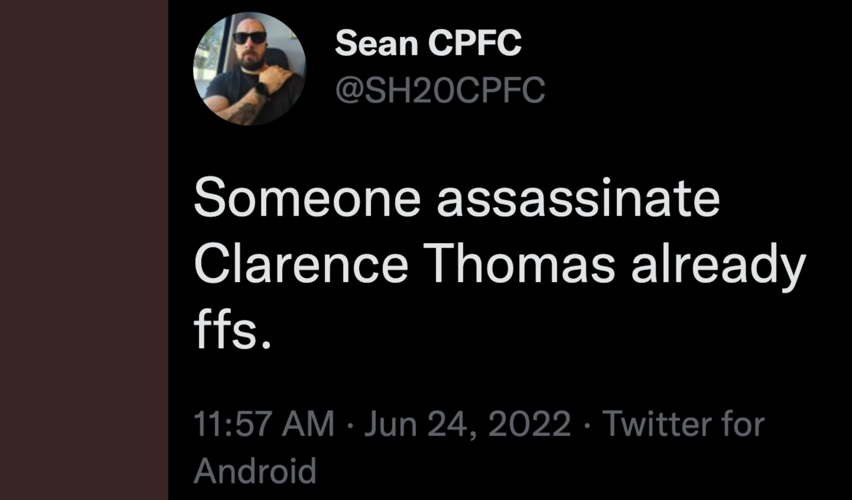 Glasgow writer, Neil Mackay, with a blue check mark, tweeted, “If I was a woman in America I’d burn the Supreme Court to the ground.”

As did writer Brandon Taylor with a blue check mark.

Author Lauren Hough, also with a blue check mark, tweeted, “I’m just a lesbian on twitter but I’ve seen a lot of protest photos and I’d like to ask you to please be sure to wear sunscreen and stay hydrated while you burn the [expletive] down,” referring to the Supreme Court building.

In reply, Susie Scott @soozscott said, “Thanks for this-love it. My sunscreen is SPF 50 btw. McChelleBelle @mcpeaches7 replied, “Check and check! And I wore comfortable shoes!”

R King @rking7066 said, “I am a lesbian on twitter and while you are burning it down, join me in using Banana Boat for all of your sunscreen needs.”

Meg C @LadyMegSoprano said, “Burn the patriarchy, not your skin!”

Wendy Byrde @MaryMarky wrote, “They want to play? Let’s play. We can cripple this country, bring it to its knees.”

Chairman of Maricopa County Young Republicans Luke Mosiman posted video of abortion activists handing out the personal address of Justice Thomas in Washington, D.C., with the intent to threaten him. In response, Mosiman said, “I hope you all get arrested tonight.”

Those making threats of violence against anyone, including a sitting Supreme Court justice, using a range of media, can face felony charges.

“Individuals who communicate a threat to injure another can face federal felony charges if they use a form of interstate commerce, such as email, mail, phone calls, texts, or online messaging, to send the threat,” Criminal Defense Lawyer explains. “This federal offense carries up to 5 years in federal prison. (18 U.S.C. § 875.) Sending such threats repeatedly can lead to federal criminal stalking charges and up to 10 years in prison. (18 U.S.C. §§ 2261, 2261A.) Depending on the circumstances of the threats or the intended recipient, other federal penalties may apply.”

Threatening judges is illegal, law scholar James Hirsen explains, “interference with the administration of justice in the manner in which it has recently been occurring is illegal,” pointing to federal statute 18 U.S.C. 1507. Penalty for violating the law results in a fine and/or a prison sentence of up to one year.

Bethany Blankley is a regular contributor to The Center Square.