NASHVILLE, Tennesse – Years ago, I vaguely remember Luke Bryan giving his guitar to a 13-year-old kid on stage who he met via the Make-a-Wish Foundation. That night, a fire was lit in young Ethan Payne. He knew then that performing country music was what he was born to do. 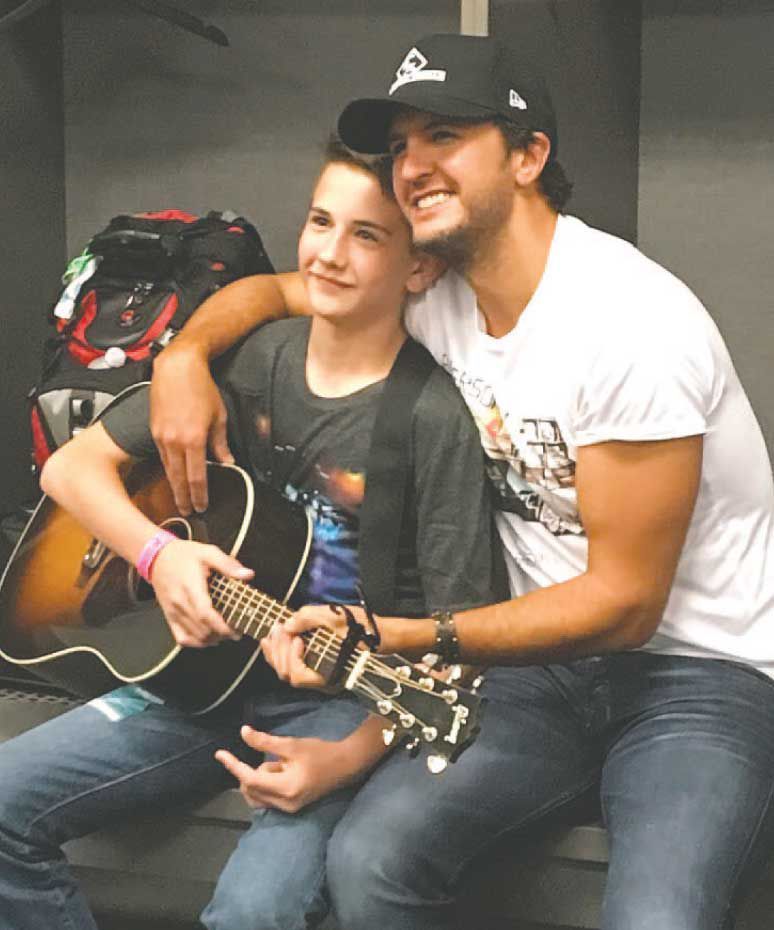 Diagnosed with Cystic Fibrosis as a toddler (18-months-old), Payne was faced with an uphill battle early on. However, that didn’t stop him from following his passions and pursuing a career in country music. I wanted to find out more about this American Idol alum.

Payne states that his Grandma bought him a guitar when he was 8-years-old. She had also bought his older brother guitars as well, but they never did anything with it. However, young Payne decided to take lessons. He took lessons for a year and since then the now accomplished guitar player has been teaching himself.

Five years ago, when Bryan called him on stage in Dallas, he knew he wanted to pursue music but was kind of scared. That night he heard all the screaming fans yelling his name. He recalled, “I heard everybody singing the words back to me, all the lights and the craziness.” He thought, “This is something that I would thoroughly enjoy doing for the rest of my life.”

After that, Bryan became a friend and a mentor and at age 15, Payne tried out for the 2019 American Idol season. He ended singing Bryan’s “Do I” in the audition and made it to the next level.

Payne is graduating high school in June of 2021. He has been homeschooled for the past two years mainly because he felt bullied by the kids who didn’t understand his dream. Until American Idol, “Nobody took me seriously. They thought I was a nerd playing guitar and singing.”

When he got the golden ticket on American Idol, he got to prove to everyone that “I am who I say am.” It was a tough run until then.

The night that Payne sang with Bryan in Dallas, Bryan gave him his guitar. Recently, he wrote and recorded a poignant and touching song about the incident, called “Luke’s Guitar.”

He stated, “The guitar he gifted me has been my motivation during the struggles with my health.”

Payne is a spokesperson for the Make-a-Wish foundation and traveled for them before COVID.

“The fact that I can’t watch these wishes come true in person anymore is not a cool deal,” he explained.

The Georgia native also travels to Nashville several times a month for songwriting sessions. His family plans to move to Nashville in 2021. He began writing with songwriters such as Danny Myrick and Kent Blazy who opened his eyes to what songwriting is about and more recently has written with modern hit writers like Cole Taylor, Thomas Archer, and Tyler Reeve. He hopes to have a publishing deal by his 18th birthday.

“The fact that you can get paid to write a song and it never gets released is just crazy to think about,” he said. But that is exactly what happens in Nashville. For every song that makes it to radio, there are 50 more that never see the light of day.

Payne takes a balanced approach to singing/songwriting. He informed, “If you are going to establish yourself as an artist, I think it is important that you have to pour your heart out on the paper for other people to really understand who you are and where you came from. You will connect a lot better with the people.”

In October, Payne released his single “Make A Scene” a song that explores falling in love for the very first time. Fittingly enough, the female, Callie, who plays Payne’s (fictional) love interest in the music video is also a Make-A-Wish kid and a cancer survivor.

He states that early on, he was a “god-awful” songwriter, but as he started writing, people began pitching songs to him. He hadn’t written a Grandpa song, but since his parents were divorced, his Grandpa became the main male role model to him. His latest single “Spin” is about his Grandfather.

“Spin takes the listener into the life-bonding relationship of a grandson and a grandfather who never let time get the best of them,” Ethan explained. “I relate to this song so much as my grandfather was my father figure before he passed away nearly five years ago. He was the first person to ever teach me how to drive and I miss him every day.”

In a crazy way, Payne’s Cystic Fibrosis has lifted him mentally and physically. “Being able to work my lungs out, is number one. If I can’t sing, then I am nothing,” he stated emphatically. Singing literally makes his lungs stronger.

Payne’s life’s motto hails from an old Tim McGraw song, “Live like you were dying.” With his youthful exuberance and dogged determination, the sky is the limit for this talented country crooner.