The Democrats are wasting their time campaigning in Michigan. With everything that President Trump has done for the Great Lake State, there’s just not much they can offer us.

As a proud Michigander, I couldn’t imagine casting my ballot for anyone other than the President who engineered the Great American Comeback that has done so much to revive our state’s fortunes.

Michigan’s unemployment rate is currently holding steady at 3.9 percent — one full percentage point lower than it was when President Trump took office. Since then, we’ve added close to 100,000 new nonfarm jobs, many of which can be attributed to the ongoing Blue Collar Boom — including tens of thousands of new jobs in the crucial manufacturing and trade, transportation, and utilities sectors.

It doesn’t get mentioned often enough in the media, but the strong and growing Trump economy has been particularly good to the women of this country. 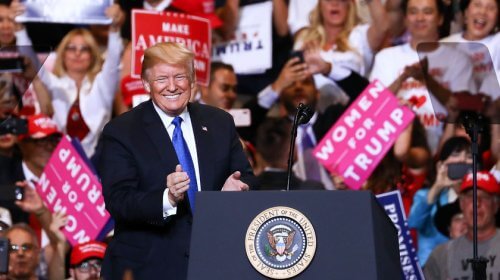 A stunning 71 percent of the approximately 2 million new jobs created in America last year were filled by women, sending the female unemployment rate to a 50-year low in 2019. It keeps falling, too, and female joblessness is now quickly approaching its lowest level in seven decades.

President Trump’s America First policies have done far more than just help our state recover from the Great Recession, though. The Trump administration has also achieved significant breakthroughs on many of the key healthcare challenges facing our country — including those created by President Obama’s disastrous reforms.

For the first time in decades, prescription drug prices are consistently falling, largely thanks to the President’s initiatives to accelerate the FDA’s approval of life-saving medication, foster competition in the healthcare marketplace, and expand access to coverage.

All of this progress is at stake in the upcoming election. The radical Democrats running for president have embraced a slew of radical socialist policies that would cripple our blossoming economy and take away some of our most cherished freedoms.

The two front-runners in the Democrat primary race, for instance, have both promised to repeal President Trump’s tax cuts and reimpose the job-killing regulations that this President eliminated because they were unnecessary impediments to economic activity. They also want to implement draconian environmental policies that would annihilate America’s entire energy sector — though the fossil fuel industry would be singled out for much more direct punishment. Likewise, former Vice President Biden and Senator Sanders are both seeking to give government bureaucrats, not doctors or patients, control over your healthcare decisions.

Donald Trump is the right choice for Michigan and America, and the Women for Trump bus tour is how we’re going to make sure that female voters in Michigan and across the Midwest know just how vital it is that we give this President another four years in the Oval Office.

The upcoming presidential election is about more than just preserving our newfound prosperity — it’s also an opportunity to ensure a brighter future for women across America. Compared to that, the radical Democrats just sound bitter and angry.

Meshawn Maddock is on the National Advisory Board for Women for Trump, and was a Michigan delegate for Donald Trump at the 2016 Republican National Convention.