The Biden education department announced Thursday that U.S. students’ plummeting scores in reading and math during the COVID-19 pandemic are all due to former President Donald Trump.

“Today’s data confirm the significant impact the prior Administration’s mismanagement of the pandemic has had on our children’s progress and academic well-being,” said Biden Education Secretary Miguel Cardona Thursday, following the report that U.S. students showed their steepest decline in decades in math and reading scores during the COVID school shutdowns.

That’s why President Biden, from day one of his Administration, pushed so hard to get schools reopened and students back into classrooms. In less than six months, our nation’s schools went from 46% being open to nearly all being open full-time in-person. That did not happen by accident: The president fought to get teachers eligible for vaccination early on so they could safely open their classrooms. He fought for the American Rescue Plan, which included $130 billion so schools could stay open and students could get the academic and mental health support they need. Our top priority remains to make sure states, schools, and districts are using these funds on strategies we know work like well-resourced schools, high-dosage tutoring and enriching afterschool programs – and directing the most resources towards students who fell furthest behind.

“We must repair the damage done by Donald Trump’s mismanagement of the pandemic – and we will,” Cardona stated.

The National Center for Education Statistics (NCES) conducted a special administration this year of the National Association of Educational Progress (NAEP) “long-term trend reading and mathematics assessments for age 9 students.” 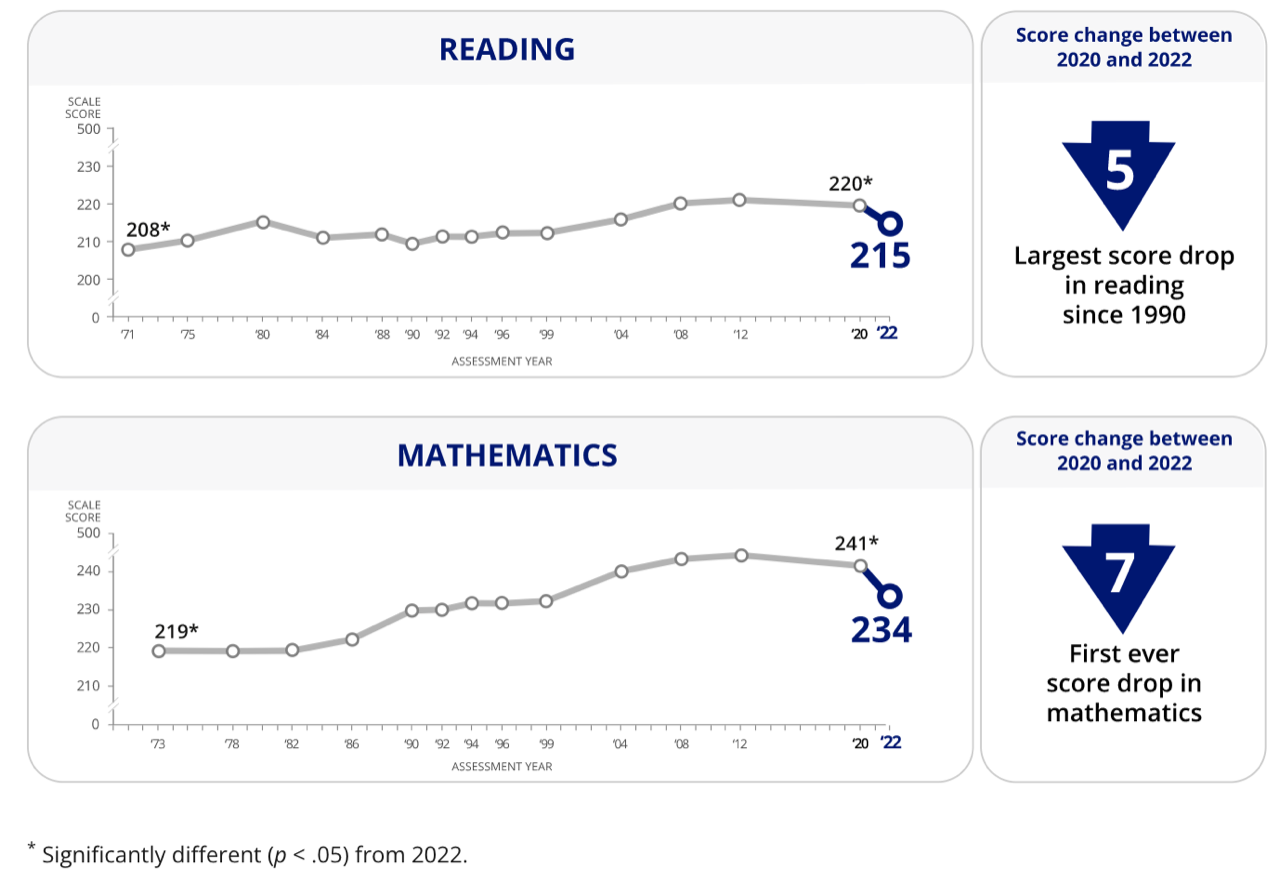 Cardona’s office, however, had to admit U.S. students’ performance had not shown improvement even prior to the COVID pandemic.

“While NAEP scores were not increasing before March 2020, these results show that we cannot be complacent about accelerating our students’ academic outcomes,” the secretary said.

In fact, in October 2019, NCES’s Dr. Peggy Carr acknowledged, “Over the past decade, there has been no progress in either mathematics or reading performance.”

“The lowest performing students – those readers who struggle the most – have made no progress in reading since the first NAEP administration assessment almost 30 years ago.”

Dr. Peggy Carr, Associate Commissioner, notes that the lowest performing students–those readers who struggle the most–have made no progress in reading since the first assessment almost 30 years ago. Learn more: https://t.co/EWajchXvIH#NAEPDay pic.twitter.com/9zanK5fPmv

In April 2020, the Boston-based Pioneer Institute published a study that found a historic drop in national reading and math scores since the adoption of the Common Core State Standards in most states.

The study revealed that, while Common Core was touted as yet another reform that would shrink the achievement gap between students from lower-income families and those from middle- and upper-class backgrounds, a decade later the gap is even wider – pre-pandemic.

The Pioneer Institute study observed, for example, regarding the post-Common Core NAEP math scores for grades four and eight:

The declines are most acute for the lowest-achieving students, increasing inequality. Scores for students at the 90th percentile have mostly continued their pre-Common Core trend of gradual improvement. But the farther behind students were, the more substantial the declines, with the biggest drops occurring for those at the 25th and 10th percentiles.

Nevertheless, Cardona failed to mention in his anti-Trump message that teachers’ unions were found to have colluded to an “unprecedented” extent with the Biden Centers for Disease Control and Prevention (CDC) to keep government schools shut down during the pandemic.

In March of this year, House Republicans discovered the collaboration between CDC and the American Federation of Teachers (AFT).

🚨 Just exposed a CDC official’s testimony confirming CDC coordinated with unions at unprecedented levels to keep kids out of school.

It was never about "The Science." https://t.co/Qufe24Uy1m

The National Catholic Educational Association (NCEA) has reported a 3.8 percent rise in student enrollment this year, attributing the increase of 62,000 students to “Catholic schools’ dedication in safely opening classrooms and supporting their communities’ needs.”

Catholic schools safely and efficiently met the needs of their communities over the past two years. Safe in-person learning throughout the pandemic appears to have been central in driving the enrollment increase. https://t.co/B5NkJAo7Q6 pic.twitter.com/buNHt9ippg