Liles talked to me and told me that they are “back in action.”

Since the group’s inception in 2009, Love and Theft have been on a plethora of record labels. 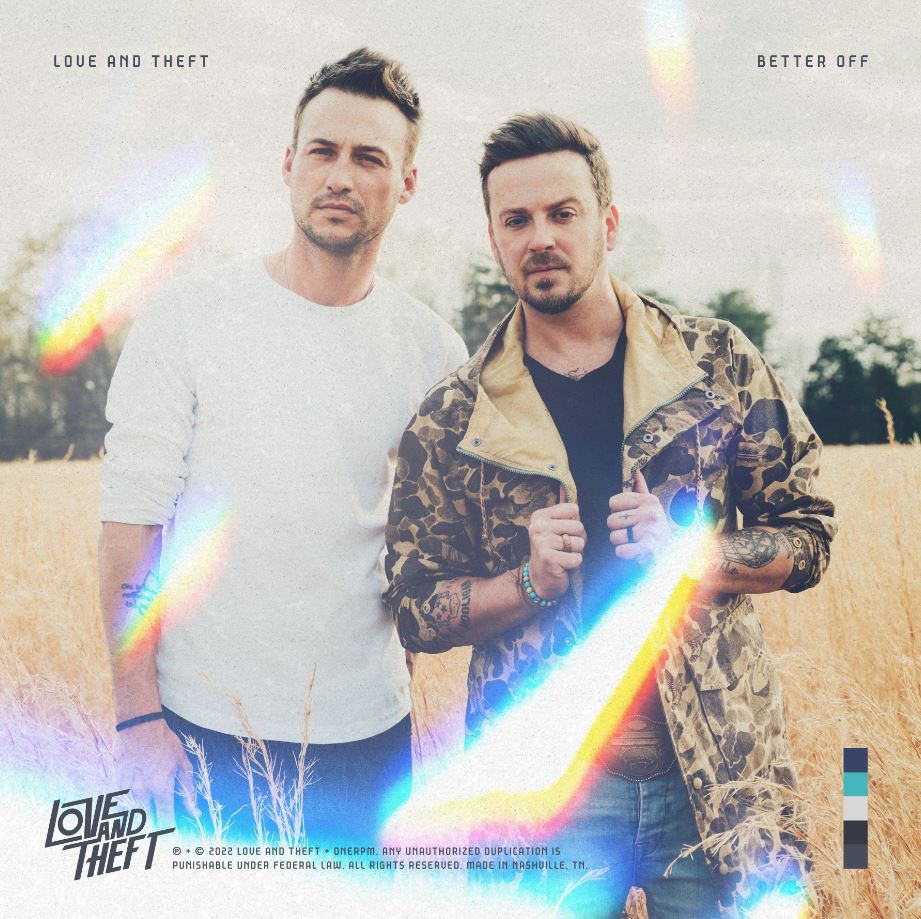 Liles confirms, “We may have been on more labels than anybody in town.”

But now that the independent artists have signed a new distribution deal with global music group ONErpm, the duo has released Better Off, a harmony-driven, six-song EP that the two wrote or co-wrote and produced entirely on their own.

Previously known for more contemporary-leaning songs (like their megahits “Runaway” and “Angel Eyes”), with Better Off, Eric Gunderson and Stephen Barker Liles have leaned more into the pop-country side of their music as the songs explore themes like love and heartbreak.

Since the duo’s explosion in 2015, they have released other songs like the much-covered “Whiskey On My Breath” (my personal favorite) and the country dance tune “Gimme Tonight.”

And even though they haven’t put out a new record in years, Liles reports that “Angels Eyes,” “Whiskey On My Breath,” and “Runaway” has kept them touring. They haven’t slowed down even during the pandemic.

“We’re very blessed on that avenue,” the musician says.

Bridging the gap between the sound Love and Theft is known for and where the duo says their music is headed, the tunes from the Better Off EP are guitar-driven and have a country-pop, playful feel. The lyric video for “Accidentally on Purpose,” was released in May and has a retro, ’80s-influenced melodic pop song that showcases the higher end of Gunderson and Lile’s vocal registers.

Other songs on the EP include the harmony-rich “Anyway,” the dreamy and percussive “Tell Me What It Feels Like,” the introspective “Mirror, Mirror” and “Downhill,” which features rap-style verses that provide a nice contrast to a melodic acoustic guitar solo.

“It has a young, fun vibe that you will want to listen to in your car or on your playlist in a boat,” Liles expresses.

Liles confirms, “It was a really fun record to make. We honed in on what we wanted to say and how we wanted to sound.” As they own their masters, they were fully in control.

They didn’t start with a specific sound in mind. They just wrote to have fun and be creative.

They co-wrote several of the songs with females. Liles feels that getting a girl’s perspective in some of the songs will help to get the ladies on board with the EP.

And while Gunderson and Liles are happily married, several songs are about heartache and breakups.

Liles explains, “A lot of those lyrics came from the girls we were writing with. When somebody comes in with a really good song idea, you’ve got to roll with it. When a person in the room is feeling that emotion, you want to take that from them.”

The song “Downhill” expresses that no one can be as good as the one you once had while “Tell Me What It Feels Like” is about how you are baffled that your ex can move on so easily.

“They are different angles of break-up song without bashing their ex,” Liles confirms.

Love and Theft are thrilled to be working with ONErprm to distribute their new EP.

“They really love this record. They are over the moon about it. You can’t buy that. If the group behind you isn’t passionate about putting it out, then it really doesn’t matter,” states Liles.

The title track, “Better Off,” track was co-written with Jared Mullins (“Homemade,” Jake Owen) and Christopher Stevens (“Everything’s Gonna Be Alright,” David Lee Murphy/Kenny Chesney) and is the most country song in the collection. Bridging the gap between the sound Love and Theft is known for and where the duo’s music is headed, “Better Off,” is an acoustic guitar-driven country-pop tune with a sexy yet playful vibe.

The music industry has greatly changed since Love and Theft began 13 years ago. But the duo has ridden the waves and gone with the flow and now are in a better place than they have been in quite a while. They truly are “better off.” Be sure to check out their newest EP today.