President Joseph R. Biden Jr.’s Homeland Security Department warned Americans of the dangers of other Americans pushing false and misleading narratives that could fuel terrorist attacks in its “Summary of Terrorism to the U.S. Homeland” released Monday and in effect until June 7.

“These threat actors seek to exacerbate societal friction to sow discord and undermine public trust in government institutions to encourage unrest, which could potentially inspire acts of violence,” according to the National Terrorism Advisory System Bulletin.

Now, Homeland Security emphasizes the narrative threat to our safety:

The United States remains in a heightened threat environment fueled by several factors, including an online environment filled with false or misleading narratives and conspiracy theories, and other forms of mis- dis- and mal-information, MDM, introduced and or amplified by foreign and domestic threat actors.

According to Homeland Security’s Center for Preventive Programs and Partnerships, these are three different things:

The Feb. 7 bulletin is not just worried about COVID-19 narratives, either:

Domestic violent extremists have also viewed attacks against U.S. critical infrastructure as a means to create chaos and advance ideological goals and have recently aspired to disrupt U.S. electric and communications critical infrastructure, including by spreading false or misleading narratives about 5G cellular technology.

Homeland Security is also concerned about Americans or anyone else complaining about how the 2022 midterm elections are conducted.

“Some domestic violent extremists have continued to advocate for violence in response to false or misleading narratives about unsubstantiated election fraud,” the bulletin said.

“The months preceding the upcoming 2022 midterm elections could provide additional opportunities for these extremists and other individuals to call for violence directed at democratic institutions, political candidates, party offices, election events and election workers,” it said.

These dangerous narratives and other dangerous ideas could be linked to the new waves of domestic violence. “Mass casualty attacks and other acts of targeted violence conducted by lone offenders and small groups acting in furtherance of ideological beliefs and or personal grievances pose an ongoing threat to the nation,” the bulletin said.

“Keep yourself safe online and maintain digital and media literacy to recognize and build resilience to false or misleading narratives,” the bulletin said.

One of the resources Homeland Security recommended is the graphic novel “Real Fake” that follows the adventures of “Rachel,” an online gamer and operative for “Symous,” a group of citizens fighting MDM online.

In the comic book, Rachel recruits “Andre” to join Symous, and the two board a Gulfstream at Van Nuys Airport. First they fly to Moscow to conduct an undercover sting on a deep fake operation, and then travel to West Africa, where they help that country’s police raid a troll farm. Deep faking is when someone uses software to manipulate audio and or video content, putting phony words in the mouth of an individual. 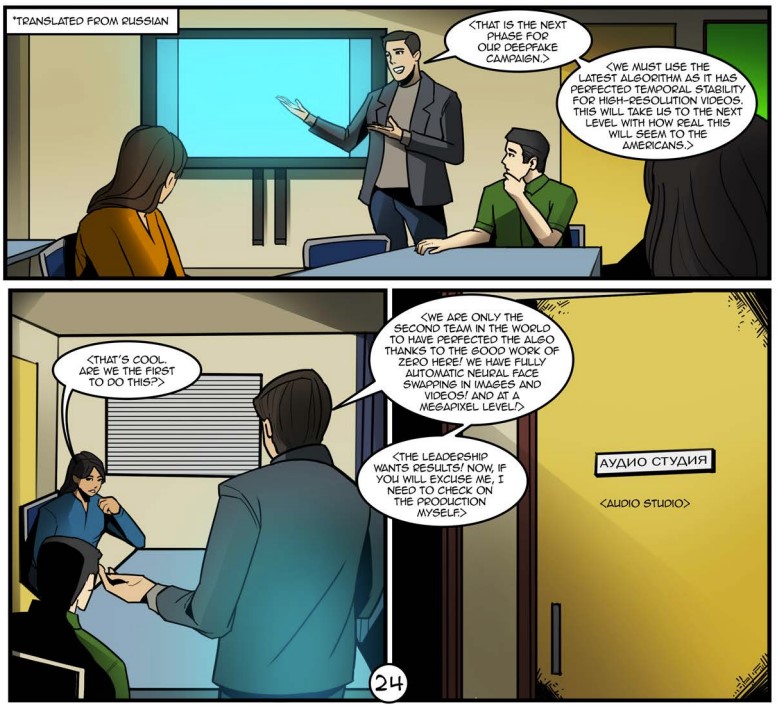 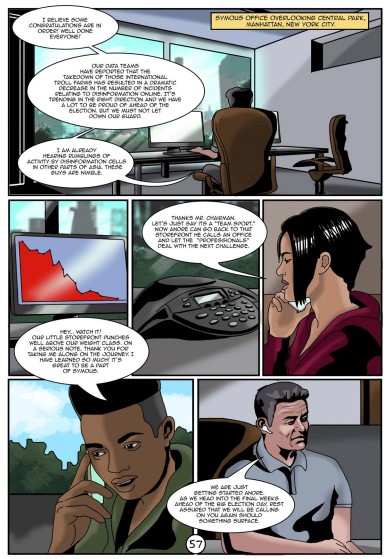 “Mr. Chairman,” the leader of Symous, thanks operatives Rachel and Andre for helping the organization break up a Russian deep fake operation and a West African troll farm in the Homeland Security Department’s graphic novel “Real Fake.” (Homeland Security image)

There has been an abrupt shift in this bulletin from the Nov. 10 bulletin that it replaces, as well as the Aug. 13 bulletin put out to prepare Americans for the 20th anniversary of the Sept. 11 attacks.

In the two previous bulletins, the focus was on domestic violent extremists, or DVE’s.

Pandemic-related stressors have contributed to increased societal strains and tensions, driving several plots by DVEs, and they may contribute to more violence this and next year. If a new COVID-19 variant emerges and new public health restrictions are imposed; as a result, anti-government violent extremists could potentially use the new restrictions as a rationale to target government or public health officials or facilities. In addition, some DVEs have attempted to use the relocation of Afghan nationals to the United States to exacerbate historical DVE grievances over immigration and the American Muslim community.

Similarly, the Aug. 13 bulletin warned that through the end of 2021, racially or ethnically motivated violent extremists (or RMVE’s), along with anti-government/anti-authority violent extremists, will remain a national threat priority for the United States.

“These extremists may seek to exploit the emergence of COVID-19 variants by viewing the potential re-establishment of public health restrictions across the United States as a rationale to conduct attacks,” the bulletin said.

While both bulletins focus on the racial and ethnic drivers of terrorism, the most dramatic shift between the Aug. 13 bulletin and the Nov. 10 bulletin was the stripping of named foreign countries.

In August, we read: “Nation-state adversaries have increased efforts to sow discord. For example, Russian, Chinese and Iranian government-linked media outlets have repeatedly amplified conspiracy theories concerning the origins of COVID-19 and effectiveness of vaccines; in some cases, amplifying calls for violence targeting persons of Asian descent.”

We were still warned about Al Qaeda and ISIS in November, but gone were the Russians, Chinese and Iranians. Nor did they appear again in the most recent bulletin.