The Michigan Democratic Party (MDP) is scrambling to walk back the messaging of a now-deleted post on its Facebook page. 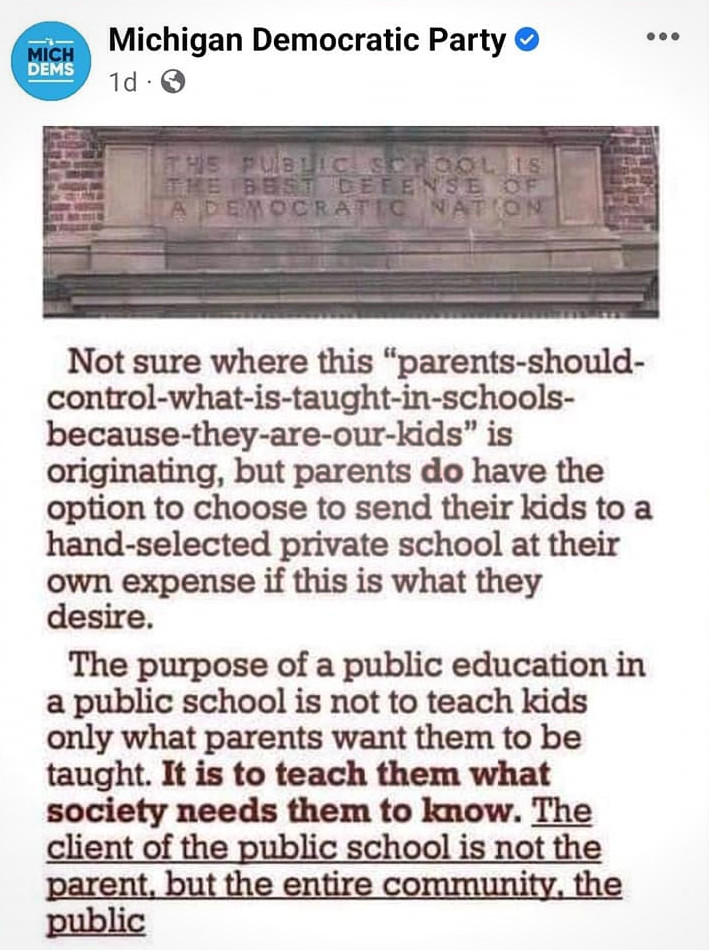 “Not sure where this ‘parents-should-control-what-is-taught-in-schools-because-they-are-our-kids’ is originating, but parents do have the option to send their kids to a hand-selected private school at their own expense if this is what they desire,” the post, which appeared to be an image with text on it, said.

“The purpose of public education in public schools is not to teach kids only what parents want them to be taught,” the post continued. “It is to teach them what society needs them to know. The client of the public school is not the parent, but the entire community, the public.”

After severe backlash, the post was deleted and the MDP on Monday took to Facebook once again to issue a clarification about its stance on parents’ roles in their children’s education.

“We have deleted a post that ignored the important role parents play—and should play—in Michigan public schools. Parents need to have a say in their children’s education, end of story,” a that post said. “The post does not reflect the views of Michigan Democrats and should not be misinterpreted as a statement of support from our elected officials or candidates.”

The MDP did not immediately return a comment request.

“Dozens of parents came to the school board meeting held here at the North Farmington High School to protest the schools 21-day equity challenge, which is a Critical Race Theory challenge which includes having the students attend and participate in an event with Black Lives Matter,” he said.

“We all agree with increasing diversity and inclusion,” Roczkowski said, “but it’s the equity program and how they relayed it to the parents and the community that we take issue with.”

Roczkowski noted that the equity challenge instructs students not to use the phrase “America is the land of opportunity,” because that is a “microaggression.”

Pete D’Abrosca is a contributor at The Michigan Star and The Star News Network. Follow Pete on Twitter. Email tips to [email protected].