A teacher at a Pennsylvania high school is in hot water after wishing death upon those unvaccinated against COVID-19 in a now-deleted Facebook post.

“Screw this guy and screw them all who are all about religious exemptions because they don’t want anyone to tell them what to do,” General McAlane High School English teacher Mollie Mumau said on Facebook. “People tell you what to do all the time, and you do it. This is such BS. “He and his ilk deserve whatever comes their way, including job losses, getting sick, and perhaps dying from the virus. But in the meantime, he’s going to put all the people around him in danger.”

The Erie Times-News said Mumau’s comment was made in response to a story it posted on its Facebook page.

Mumau’s rant only got more violent, calling for those who do not take the vaccine to be shot.

“I don’t know why the GOP doesn’t just take those guns they profess to love so much and just start shooting all of their constituents who feel this way,” she continued. “It would be quicker and ultimately safer than putting me and my friends and family at risk.” 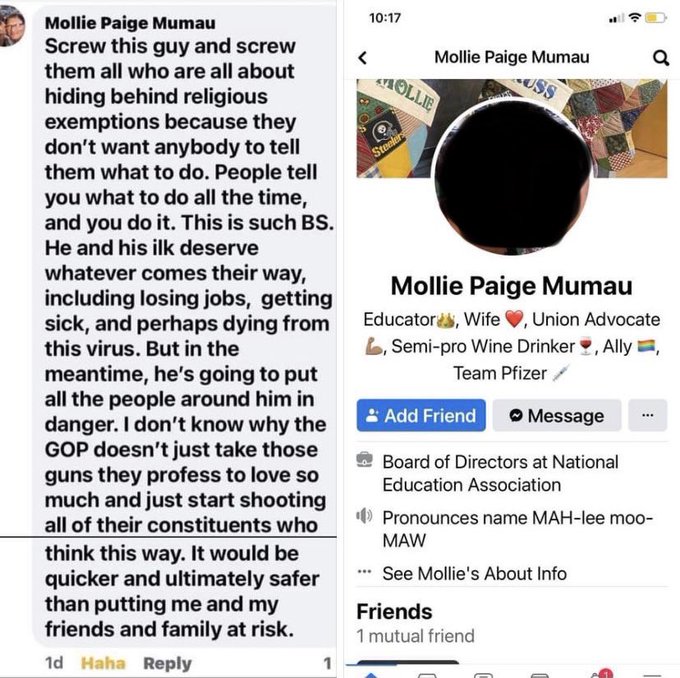 The school reportedly received more than 100 phone calls from parents and others in response to the post. Mumau’s entire Facebook page appears to have been deleted.

The school also used Facebook to address the issue.

“The district is aware of a potentially inappropriate social media comment by a staff member. The district will investigate the matter and act accordingly. In all situations, the district’s utmost concern is the safety of our students and staff,” the school district said in a post.

Pamela Mackowski, a spokeswoman for the school, declined to comment further.

“Because this is a personnel matter, I am unable to comment on your questions,” she told The Star News Network.

Mumau also described herself as a Pennsylvania Board Director for the National Education Association (NEA), the nation’s largest teacher’s union.

The NEA did not respond to a comment request.