NASHVILLE, Tennessee  I first heard about CreatiVets from a songwriter who also worked with the organization. CreatiVets’ is a 501(c)(3) non-profit organization whose mission is to provide wounded veterans struggling with post-traumatic stress (PTS) and traumatic brain injury (TBI) with opportunities to use art, music, and creative writing to heal their unseen wounds of war.

Being a big believer in the mantra “Music Heals” and the wife of a veteran, I knew this was an organization that I wanted to learn more about.

I interviewed program director, Brett Gillan to find out more about this impressive organization. Co-founder and executive director, Richard Casper returned from war where he served four years as an infantryman in the United States Marine Corps in Fallujah, Iraq. While he was there, he was hit by four IEDs and his best friend basically died in his arms. He came home with severe PTS and TBI. At the time, the VA didn’t diagnose any of these disorders in him. Casper was very depressed and suicidal and didn’t know why. He ended up finding the heart in music healing for himself.

He thought, “Man, I got to do this for other veterans.”

Casper met a band in Panama City Beach called Blackjack Billy and asked if they would consider writing with a veteran. They agreed and met veteran Jesse in Nashville and he was their first trial or “proof of concept” in this experiment. CreatiVets have since partnered with Big Machine Label Group (BMLG) and released the song, “Until It Feels Like Home.”

“This song proved that the program would work and it kind of evolved from there,” Gillan explained.

With Nashville being the songwriting capital of the world, it only made sense to house the program there where many of the best songwriters live. They pair the veterans with professional songwriters where they put that veteran’s story in a song.

CreatiVets works with veterans through songwriting and art. Everything they do is very intentional as based on Casper’s own experience.

Gillan explains, “We try to offer things that veterans get excited about; things where their excitement outweighs their anxiety to do the program. Everything is 100% free to veterans because we don’t want to give them any barriers or excuse not to do the program.”

They cover airfare, food, lodging, everything.

They have also partnered with the Grand Ole’ Opry and now when they write songs, they write them backstage.

Additionally, CreatiVets has partnered with The School of the Art Institute of Chicago (SAIC) for a three-week art program and with the University of Southern California (USC) for a two-week, fully-accredited art program for disabled veterans at no cost to the veteran. Veterans have full access to studios and equipment at the school, and the program allows them to create and discuss art with some of the best art instructors in the country. The veterans learn to tell their stories through art.

Gillan continues. “All of their programs are peer to peer-based. It’s another veteran talking to that veteran; such as pairing a post 9-11 Marine with another post 9-11 Marine.” 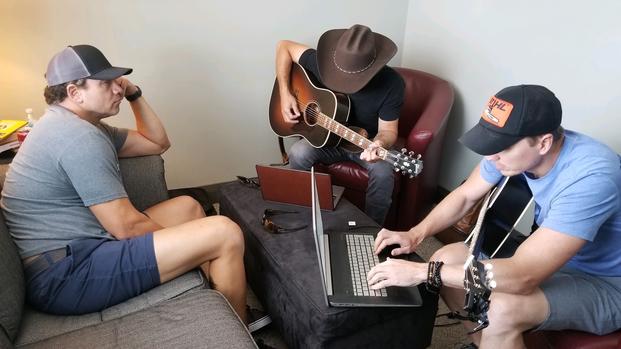 Currently, CreatiVets has a huge waiting list. With all expenses paid, this program is often the only one many veterans will even consider participating in.

It is well-documented that veterans have a higher than average suicide rate. And as many as 70% never seek help. The CreatiVets program can reach military personnel when other VA programs cannot.

Although the songs can be heart-wrenching you will still want to play and listen to them. The song “Bringing Me Home” was written by veteran Bret McCauley, Richard Casper of CreatiVets, and songwriters Robert Arthur and Jesse Murphy.

“Bringing Me Home” details several small acts of kindness McCauley experienced upon returning home from duty. He was inspired to express his gratitude in song to all those who had unknowingly helped him heal; as the chorus of the song reads, “So many have carried me so far/and I hope you know who you are/Thank you for bringing me home.”

Veteran John Fricano alongside Richard Casper, Tommy Karlas, Barry Zito composed the song “Don’t Give Up On Me” which is a narrative for the people supporting veterans who are healing at home.

Since CreatiVets has partnered with BMLG and now Amazon/Alexa, you can now hear veteran-created songs on your home listening device.

They have now released a whole album called Veteran Songs comprised of 11 original songs which can be purchased on Amazon.

When BMLG releases a CreatiVets song, it is always written by a veteran in their program and often features well-known artists like Vince Gill, Aaron Lewis, and Dan Tyminski like the song “They Call Me Doc” which has a video with it.

Also CreatiVets song “Rise Above” featuring Craig Campbell is not to be missed. Those who prefer YouTube can now subscribe to their channel.

Says one Iraq combat veteran, “Even though my friends and family do not understand what it was like in Iraq, I believe my song gives them a better understanding of what I went through while deployed.”

Another relates, “The song gave me a chance to tell my daughter something I never could quite figure out how to do. I felt as if I was put in a position where even if I had said the words to her face-to-face, it didn’t have nearly as much impact as the song did, and it definitely brought [her] closer to me again.”

In conclusion, a serviceman expounds, “I strongly believe every veteran should tell their story for the benefit of themselves and their loved ones. Personally, it was very hard for me to talk about my Iraq war experience, and I avoided questions about it. I didn’t want to revisit the sad feelings or horrific memories. It wasn’t until after I began to tell my story to people that I felt a sense of relief from some of the grief I held inside.”

CreatiVets is one of the most important veteran programs I have ever come across. If you would like to contribute to their endeavor, please go to the website and donate.