What started as a one-night Halloween Harvest Night worship music event in 2008 for a church opening a new building in Nevada, turned into an event involving multiple churches. Matt and his church reached out to five other churches in the area which brought all those churches together in unity out of worshiping and fellowship. “Over 300 attended the event which was big news for us and our small town of Carson City, Nevada,” Matt reminisced. 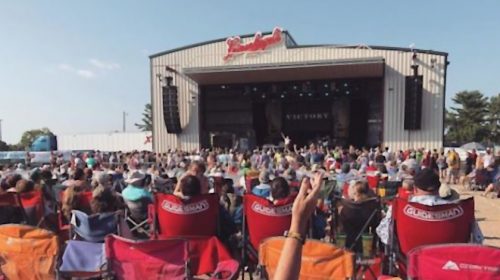 Justin explains, “We were all worship leaders from different churches and we didn’t have enough people in one church to make a full worship team so it worked out for a community night of worship.”

For a while they just keep playing together every other month then God started opening up doors for them. Thirteen years later, they are still going strong.

In 2013, I Am They signed with Provident Label Group. In 2014 they tracked their record and in 2015 they release their first album, I Am They, started touring and have been going strong ever since.

The band recently released their third album Faithful God which is a look back and a look forward, a declaration of promises kept and promises yet to come.

The album’s first single, aptly titled “Faithful God,” speaks to those familiar times of confusion, times when you aren’t sure what next step to take, but just as quickly confirms that beyond all hope, They remind us that God hasn’t let go, the story isn’t over.

Matt describes, “We initially started recording music in our living rooms. It was more of a folk feel then. We have kind of progressed from there. We have opened up different pockets of who we are represented in a kind of a new and fresh way.”

Their first self-titled album I Am They charted at number 10 in 2015 and is comprised of fan-favorite songs, “From The Day,” “We Are Yours” and “Make A Way.”

States Matt, “This song talks about our stories individually and collectively as a band and it has been really cool to share those testimonies on the road and hear other people’s testimony through us being open and vulnerable.”

The comments I have read about the song prove that it gives a sense of hope to the hopeless.

Like all musicians, I Am They were in a holding pattern during the pandemic. They started live-streaming one or two days a week, but during this time, they completed their album, Faithful God.

As they started out trying to get back on the road, Nicole states, “You never knew what was going to happen from show to show. Our biggest thing as a band was trying to find unity in our commonalities. No matter whether it was masks or vaccinations, we were trying to find the heart behind it. Let’s do the things that we need to do to stay safe and honor each other while still trying to do shows.” 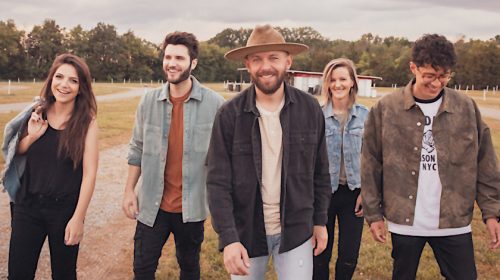 The pandemic showed them and us that there was so much we took for granted.

With Faithful God, there’s a heaviness that’s been lifted, and in its place, a redefined sense of what it means to hope for the future. Even the band’s moniker speaks to their belief in promises held together by trust, that God is pointing the way forward.

With all the divisiveness in our nation, people have lost focus on who and what really matters. With songs like “Promises,” “Holding Onto Hope” and “Lift My Eyes,” the band reminds us to shift our focus back to the One who is in control.

Abby explains, “One of the core aspects of I Am they are not just and a band, but a ministry. We need to set aside our differences and bring people together in worship. We have witnessed that when people are focusing on God, they tend to not focus on their inner personal squabbles.”

She continues, “Each of us in the band is very different personality-wise and over the time that we’ve been together, we’ve learned to appreciate and acknowledge those things about each other and actually use them to come closer together rather than using our differences as something that would divide us.”

Brandon states his favorite song of the new record is “All Along.” He explains, “It’s the only song that we’ve ever done that is from God’s perspective over our lives. It’s kind of like the footprints in the sand of just looking back and whatever circumstances we are going through, the Lord reminds us ‘I was there with you all along.’ Sometimes we need to hear that reassuring voice we are seen and known at all times.”

Justin concurs, “It’s super fun. We’ve been closing out the night with that one. We have usually been singing after the song, “Scars.”

With Faithful God, they wanted to show how God brings you out the “wreckage.”

We wanted to express the idea of stepping into the promises of God and His freedom and hope and His deliverance. “Delivered” is a freedom anthem that we get to sing over ourselves and everybody else,” Matt confirms.

With touring finally being back in full force, the band finds the audience is bigger than ever. They have a fully packed touring schedule until the end of the year. If you live in the Nashville area and you want to see I Am They in person, there are still tickets available to Lifest event where they will be performing on July 30.