NASHVILLE, Tennessee  For the past several years, one of my favorite Christmas carols has been “Beautiful Star of Bethlehem.” And though many country greats have recorded their version, the simplistic, yet flawlessly harmonized version by Dailey & Vincent perfectly matches the sentiment of the song.

When I had the opportunity to interview Darrin Vincent, I took it.

As I already knew from interviewing Darrin’s older sister, Rhonda Vincent, he grew up in music. The family was already performing by the time he was born. They were part of the Sally Mountain Show, then later the Bluegrass Festival.

Jamie Dailey was also steeped in bluegrass music. His father was part of a band called the Four J’s. From age five, Dailey played music in middle Tennessee with his Dad. As he got older he gained national attention when he joined Doyle Lawson & Quicksilver in 1998 as lead baritone and tenor singer.

Vincent admits for his whole life, he has only played music. Originally part of Ricky Skaggs’ ultra-talented Kentucky Thunder Band, it was evident that he was born to perform music. He toured with Skaggs for ten years before joining Dailey.

Vincent & Dailey met each other in 2001 in Louisville, Kentucky, at the IBMA Bluegrass Music Award Show. 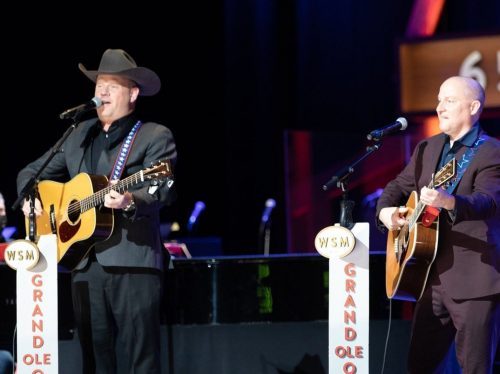 Vincent recalls, “He was doing a song called, ‘Be Living’ with Doyle. I was sitting there a few rows back with Ricky Skaggs and Sharon. When he hit those high notes on the chorus, his voice was so pure.”

After his performance, Vincent went backstage and introduced himself. They exchange phone numbers and found out that lived about thirty minutes away from each other.

Later on, they met a Cracker Barrel, then drove around talking about music.

“Jamie had a recorder on his sun visor where he could write songs while driving. He said to me, ‘sing this.’ He and I picked up our harmony parts and it was just like family harmony. It was instant. That’s how we knew our voices sounded good together.”

Dailey & Vincent decided to work together as a duet. In January 2007, they handed in one-year notices to Skaggs and Lawson. Their first show together was at the Grand Ole Opry, staged at the Ryman Auditorium, on Dec. 29, 2007. Their debut album, Dailey & Vincent, was released in January 2008 and success swiftly followed.

The traditional sound of gospel and bluegrass are so intertwined it is often hard to speak of one without the other. Their song, “By the Mark,” featuring Bill and Gloria Gaither is so moving, it will touch even the hardest of hearts. Additionally, the song, “I Believe” sung with Jimmy Fortune has had nearly six million views on YouTube alone.

With a different tone, their song, “I’ll Leave My Heart In Tennessee” is one that those who hail from the great state can truly appreciate.

Dailey and Vincent have been fortunate to become successful musicians all while embracing their faith and family.

Vincent concurs, “That is the most important things to us, the Lord Jesus, family, and our friends pretty much in that order. We are not perfect by any means, but we try to sing positive lyrics for those who are out there searching and trying to be a light to those who need comfort. I feel like that’s our calling.”

They also like to salute America and honor military families. Vincent’s grandfather was in the Army where he earned two purple hearts. From their Patriots and Poets album, their original song, “America, I Love You” is proof of their devotion to the USA.

Even still, the highlight of their career was being asked to join the Grand Ole’ Opry in 2017. They grew up listening to the show on WSM.

Vincent exclaims, “It was a huge honor and still is to be a part of the first family of Country Music, The Grand Ole’ Opry. When we were asked by Marty Stuart at the Ryman that night, I immediately dropped to my knees and cried, thanking the Lord.”

It never crossed their minds that they would ever be asked to be a part of the Opry but they are so grateful and consider it to be one of the highest honors in music.

The talented duo is still doing studio work and producing music for other up-and-coming artists. In the past, they have done work for Dolly (including her recent Holly Dolly Christmas album), the Isaacs, and many more.

Dailey & Vincent continue to record and tour prolifically, taking their show overseas and throughout the United States. As of 2021, they have received five Grammy Awards individually, three Grammy nominations collectively, six Dove Awards from the Gospel Music Association, and 35 IBMA Awards altogether.

The duo are currently working on an all-country record and have included three songs written by Vince Gill.

“He gave us 31 songs to listen to and we picked out three. He had such a way of playing on the guitar that we asked him to record it with them and he was so gracious to take the time and do it.” Vincent continued, “We’ve been wanting to do a country record for a lot of years and finally have the opportunity.”

Most recently, Dailey and Vincent were recognized at the 50th Annual Smithville Fiddlers’ Jamboree and Crafts Festival on Saturday, July 3 in Downtown Smithville, Tennessee for their contributions as one of the most popular bands in contemporary American music, embracing bluegrass, country, and gospel.

Dailey & Vincent are touring extensively including playing the Ryman on July 22nd and the Opry on July 27th and at many performing arts centers and festivals throughout the United States.

You can also catch Dailey & Vincent on their TV show where they perform, host, and interview special guests.