NASHVILLE, Tennessee- Nashville is famous for its writers’ rounds. The Song Suffragettes is the only all-female writers’ round and they have been consistently performing at the Listening Room on Monday nights for seven years.

Todd Cassetty founded Song Suffragettes for the simple reason of giving female singer-songwriters a place to play their music and be heard. Those who follow country music know that it is not an even playing field when it comes to women getting record deals and having their music played on country radio. 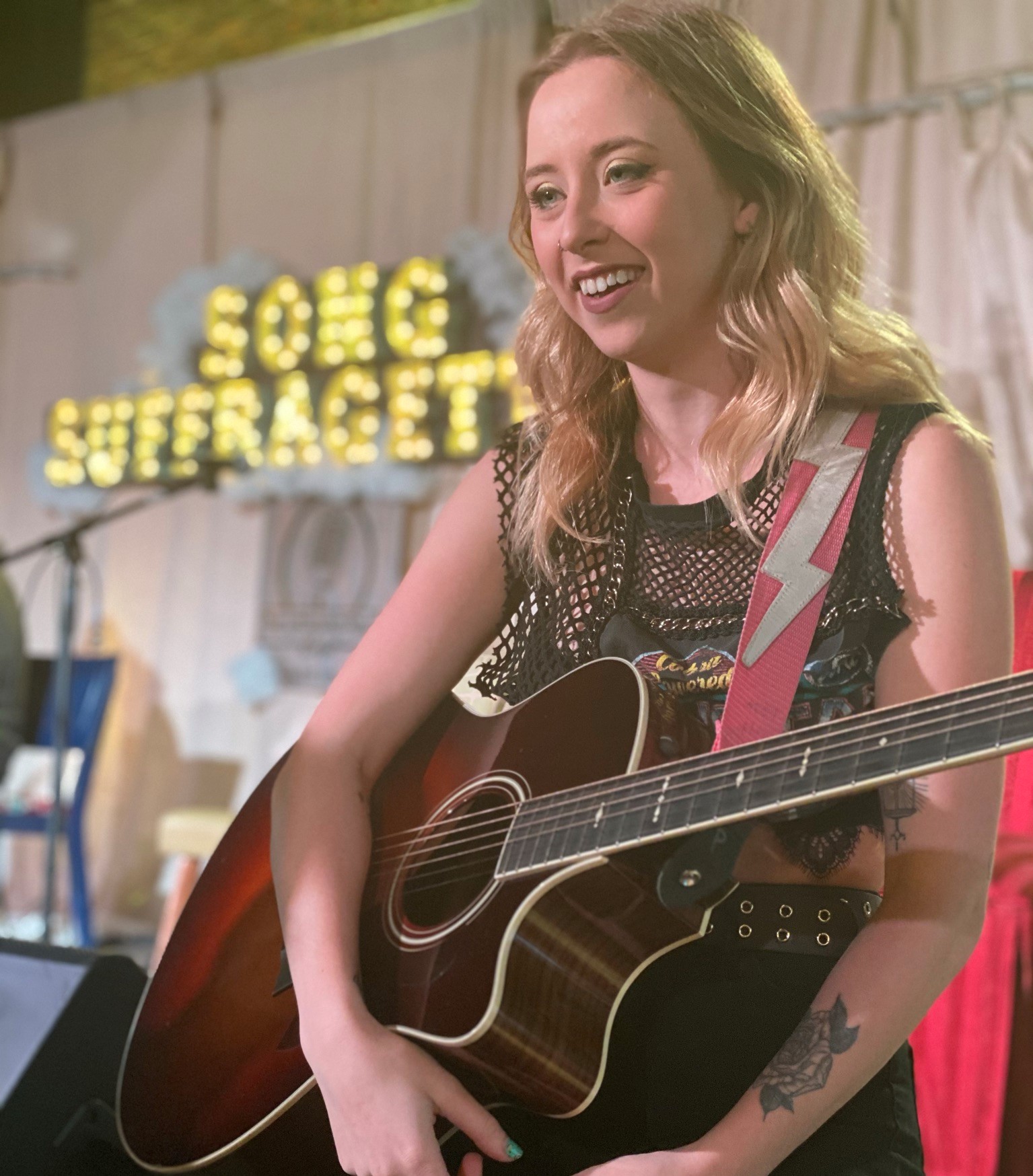 “What started out as just a show seven years ago has become much more than that in the greater spectrum of Nashville and within the wider community,” Cassetty said. “Through the show and other initiatives, Song Suffragettes has become a community unto itself, a place where like-ambitioned women can come together and form relationships where they can create together, commiserate together or maybe just go out drinking together.”

The most important takeaway from this whole scenario is how much these women support each other. It isn’t always encouraged in the competitive music field, but it happens every Monday night at the Listening Room and it is a beautiful thing to behold.

For the big celebration Monday night, they had two rounds of singer-songwriters instead of the normal one.

In the first session, the special guest was Tenille Arts. Arts’ performance was a special homecoming for Song Suffragettes since Arts played her first of many Song Suffragettes shows back in May of 2016. The Canadian-born songstress visited Nashville on and off since age 15 and at age 21 moved here permanently. She played for Cassetty immediately upon arrival and he invited her to play with the Suffragettes.

She recalled, “It was just so amazing and such an opportunity to play for people. I was so grateful. And I am so grateful to be here on the seventh anniversary.”

Her smash hit single, “Somebody Like That” was co-written by Arts and fellow Song Suffragettes Allison Veltz and Alex Kline—Kline also produced the track. Arts was recently nominated for an ACM award as “Best New Female Artist.”

Joining Arts and hosting the first round of the night was Kalie Shorr along with fellow singer-songwriters Madeline Finn, Livy Jeanne and newcomer, Brittney Spencer.

The multi-talented Kalie Shorr was at the very first Song Suffragettes show. Since she didn’t go to college, this was her community. She was also introduced to her best friend, Candi Carpenter, and the pair have become a powerful songwriting team who creates music that resonates deeply with their fans.

“This place (the Listening Room) special to me and it feels very much like home,” she reminisced.

Her recent album “Open Book” was one of the most highly acclaimed pop-country records of 2019.

Grammy-nominated Ashley McBryde was presented with the Song Suffragettes’ Yellow Rose of Inspiration Award for her contributions to the songwriting community, including writing many of the songs that have inspired the 308 women who have performed on the Song Suffragettes stage through the years. McBryde is only the third woman to receive that honor after esteemed songwriter/publisher Liz Rose who received it in 2019 and hitmaker Laura Veltz who received it in 2020. McBryde also took the stage where she performed, “One Night Standards” and “Girl Going Nowhere.” 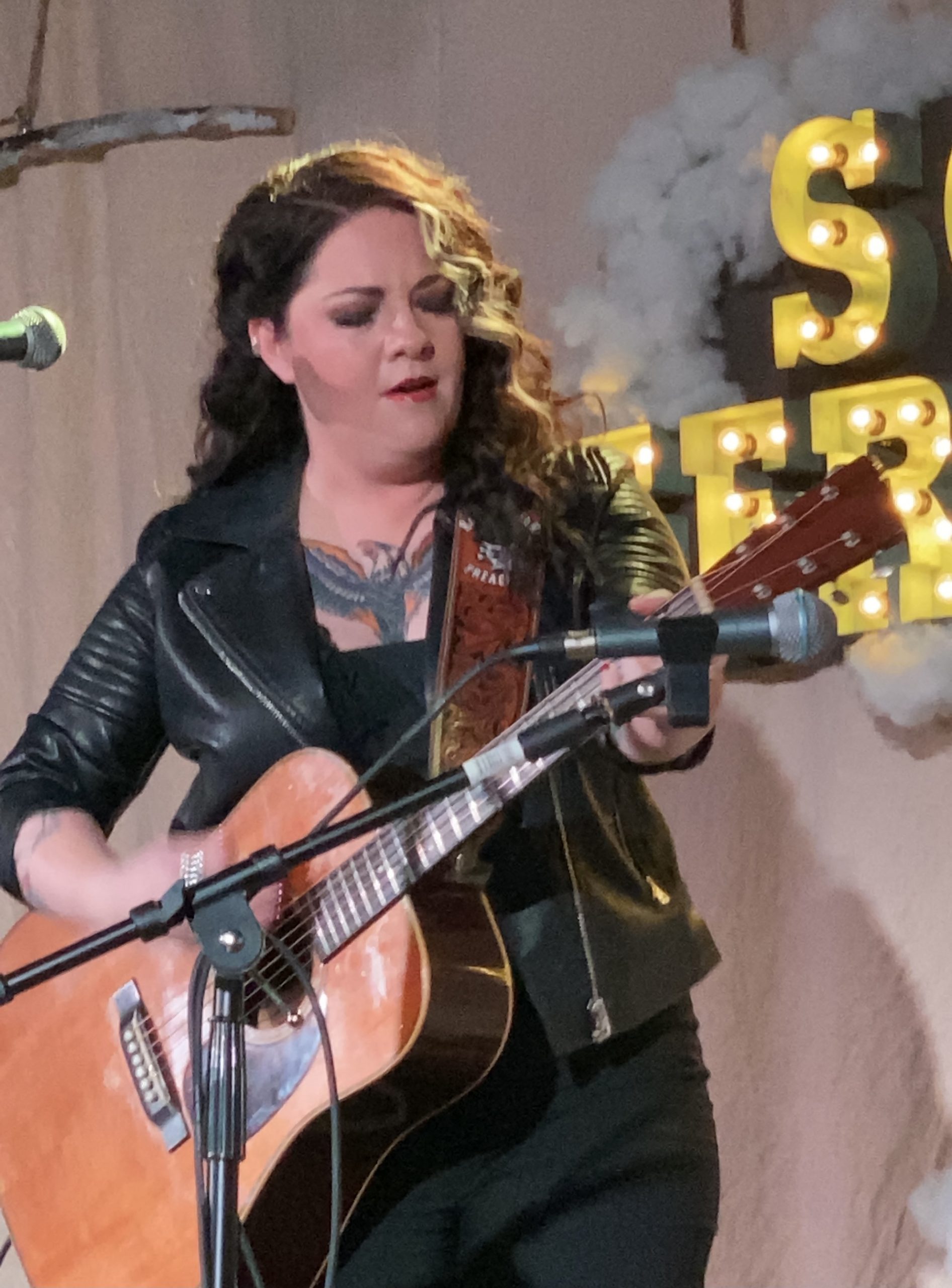 Produced with the indomitable Brandi Carlisle, Carpenter sang her newly released song, “Dirt Around the Tree.”

She was not a newcomer to the music industry when she started playing with Song Suffragettes.

Carpenter candidly stated, “I like having the opportunity to hopefully mentor and lift other young artists who are starting out in Nashville because I wish I had had that when I moved here.”

Song Suffragettes Cajon player, Mia Morris, joined the group when she was just 14. I asked the now 16-year-old rocker who has nearly 50,000 YouTube subscribers why she keeps playing weekly for the group.

She states. These people, they’re my sisters. The Song Suffragettes literally gave me the majority of the connections I have made in the town and I cannot be more thankful for that,” she proudly proclaims.

Morris wowed the crowd with her self-composed and produced the song, “Last Dance.”

Cassetty naively thought if the industry wonks could hear the incredible music coming from these women that they would get the support that it needs and industry support it deserves. Unfortunately, the prospects for change have not progressed as significantly as hoped.

He explains, “What we have been successful at building, in addition to addressing the ongoing disparity between female and male creatives, is in many ways greater than the original mission.”

To date, Song Suffragettes has been involved in mentoring the lives of more than 300 female singer-songwriters. Twenty-one artists have gone on to receive recording contracts and 49 have landed publishing deals.

It is their goal to continue to support female creatives for years to come.

A live recording of the historic show is available here.

BLM Blocks Stillwater Man from Getting Home, Police Intervene and Detain Him