NASHVILLE, Tennessee-  No one in Emily Brooke’s family was musical. Young Brooke was a cheerleader, not a singer. But like many preteen girls twelve years ago, Brooke was super into Taylor Swift and Hannah Montana. She wanted to learn to play guitar as they did.

Her parents told her that they couldn’t afford both, so she had to choose, cheering or guitar. Ultimately guitar won out.

At age 9, Brooke took guitar lessons for about a year. After a year, she started playing open mic night at a local coffee shop. The community embraced Brooke which gave her the courage to continue. 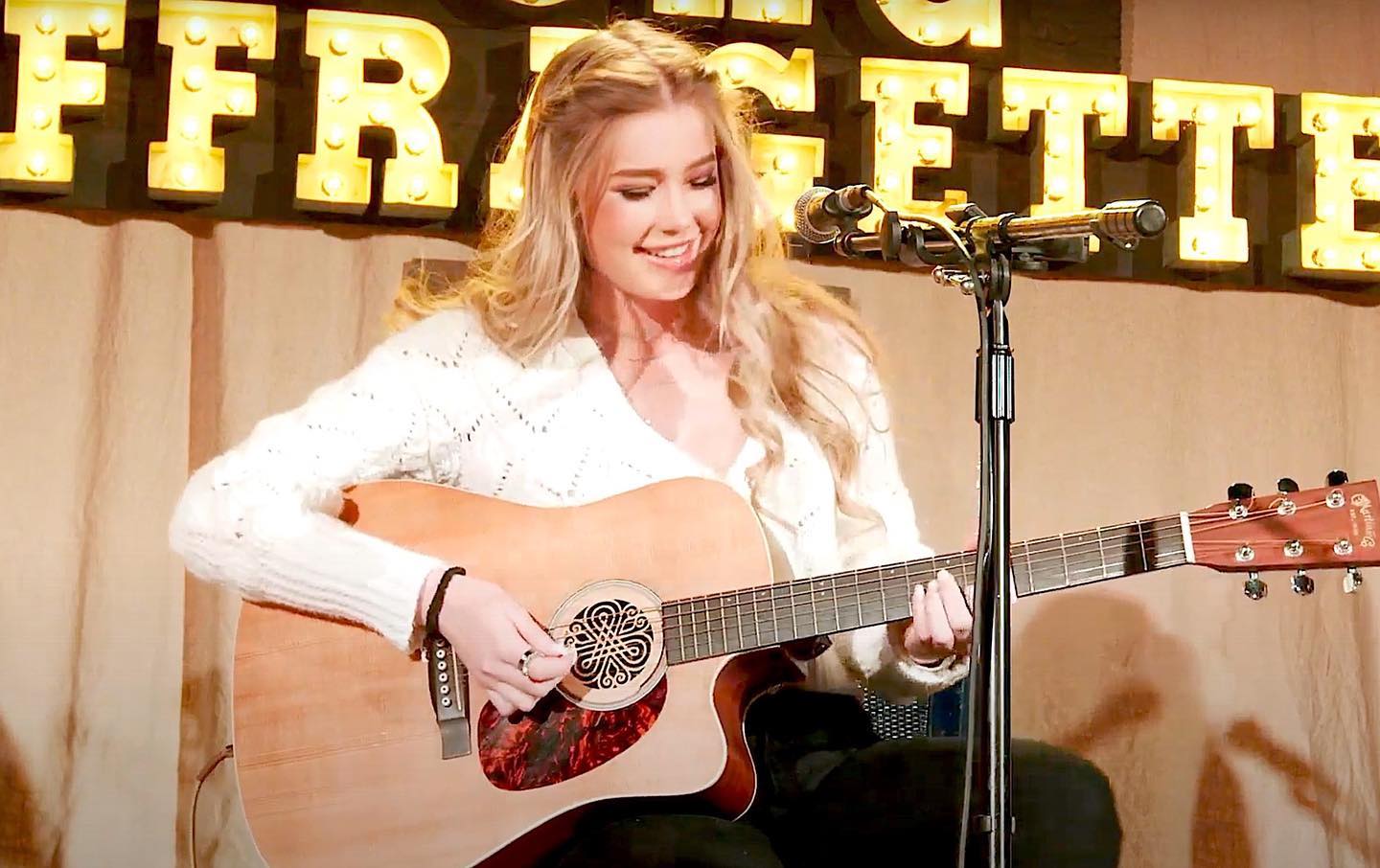 Her parents said, “We think she has a really good voice.” Others also thought she was amazing. But Brooke wondered if people from her hometown were just being nice.

A few months later, there was a “Colgate Country Showdown” in Suwannee River, Florida. Brooke and her family drove the eight hours from Wellington so she could perform.

When Brooke won the competition, she knew that these random people were not just local fans. Her family then knew she had the talent to become a professional singer.

Even as a young child, she knew that she needed to be in Nashville. They drove to Nashville when she was 10 and it was her first CMA Fest. They went to all the shows at the Convention Center and LP Field (now Nissan Stadium).

She told her mom, “This is where I need to live. There is music everywhere. It’s amazing. Can we move here?”

Also, during that trip, Brooke got to meet her idol, Taylor Swift. It turns out that the line to meet Swift started forming the day before the actual meet and greet. Brooke and her mom got in the line, slept on the street, while her dad and brother got them bug spray pool floaties to sleep on.

Not only that, a vendor was walking by with Taylor Swift magazines. He saw the guitar that she was going to get signed. He said, “You can have a magazine, but you have to play [guitar] for it.”

She started playing her guitar to hundreds of people who were also waiting in line. Everyone was excited for Brooke to play for them. She ended up singing and playing the entire night.

When it was time to meet Taylor Swift, the person ahead of them told Swift’s mom, “You have to hear this little girl. She’s been entertaining us all night. She’s so amazing.”

Brooke got to sing for Swift’s mom and there is even a video of it with Swift in the background. Swift’s family spent like 45 minutes giving them tips and advice.

That initial trip to Nashville put the desire in young Brooke’s soul to pursue music full-time. She wanted to move but it was not possible at that time. Brooke’s mother said, “Write a song about it.”

The first song that she was wrote was a song called “Wild and Free” which she got to sing at the Nashville Palace at the tender age of 12. It was evident even then that this girl with God-given power vocals was born to entertain.

Trips back and forth to Nashville became the norm for Brooke’s family. On one of the trips, an acquaintance invited her to sing on stage at Rippy’s on Broadway. Renowned singer-songwriter, Billy Yates heard her singing. He was looking to see who that woman on stage was. He saw the young girl instead and took her under his wing.

Yates became Brooke’s first producer and first co-writer. States Brookes, “He was the first person [in Nashville] to believe in me and help me out.”

Yates had his own show at CMA Fest which Brooke’s performed at for five years.

At age 15, Brooke went on American Idol. “The judges were so sweet and I made so many amazing friends. It was very cool, but definitely a lot of work and long hours. I personally loved being busy.”

She recalled, “After I got off the show, I started focusing on stage performance and songwriting. Being on American Idol really raised my confidence.”

She started going back and forth to Nashville more often where she would do co-writes. It was a way to meet a lot of new people.

Although she has been writing non-stop for many years now, several years ago, she wrote a song called “Hungry,” which “was completely me as a songwriter, as an artist. It fit me perfectly.” Other projects she put out were amazing and good but they didn’t speak to her the way “Hungry” did. That was a turning point in her career as a singer-songwriter.

Three years ago, after a break-up she wrote the song “Easy On Me.” She explained, “[The song] was about my first boyfriend and I was so super heartbroken. You don’t realize at the time that it wasn’t the right person for you. I went into the writer’s session with the feeling, ‘Don’t go easy on me. Freakin’ break my heart because I don’t want to like you afterward.’ It was super frustrating.” When they finished writing the song, they knew they had something special.

Brooke is working on an EP and wasn’t anticipating releasing “Easy On Me” as the first single. But after posting a clip of it on TikTok, it blew up with over half a million views. The fans begged, “we need this song” so inadvertently “Easy On Me” became the first song she released.

“It wasn’t what I was planning on doing. But wild enough, the day that I filmed the TikTok (video) was the same exact day that we wrote it three years ago,” she said. “It was a really weird God-timing thing.”

Many of the songs she has written have been sparked by different people and experiences in her life. “Waste My Time” was inspired by an event that happened after her prom. The song, “That Dress” came from someone stating, “He should see you in that dress.”

“It’s really cool how you can take such simple occurrences and make a song out of it,” the singer said.

Brooke has learned that break-ups often inspire the best song ideas. Songs like “In Love With the Memories” and “I Wish I Could Break Your Heart” are examples.

She moved to Nashville permanently in October 2019 where she says she had a few months to meet songwriters, co-write and perform before the pandemic taking over.

Brooke, now 22 years old, has already been singing and songwriting for over a decade. She has opened for nationally known artists like Kelsea Ballerini, Old Dominion, Ryan Hurd, Charles Kelley, Craig Campbell, and Randy Houser — just to name a few.

Since COVID, Brooke has continued co-writing via Zoom and Face-time. She has been working with singer-songwriter Aaron Patrick to create/produce her newest music. At least from the songwriting aspect, things haven’t changed that much. She has been able to perform with the Song Suffragettes at The Listening Room. Brooke will continue to write and record music and begin touring as smaller venues slowly start to reopen.