On Dec. 16 the top-ranked Journal of the American Medical Association (JAMA) published a headline-grabbing article about the risks that Covid poses to young people. The article and an accompanying New York Times piece by its authors strongly implied that people under the age of 45 face a high risk from the disease and, furthermore, this risk is understated by official statistics.

This claim runs counter to the CDC’s own estimated Infection Fatality Ratios by age group, which suggest that the two youngest demographic groups (0-20 and 21-49) face a mortality risk that is lower than seasonal influenza. Covid fatalities increase dramatically with age, and persons over 70 face a pronounced risk. However young people face comparatively low risk. Indeed, CDC data show that persons under the age of 40 account for less than 2% of Covid fatalities despite also making up half of all known cases to date.

The JAMA study, however, contends that Covid deaths for persons under age 45 are severely underreported. To reach this conclusion they turn to excess death statistics for March through July 2020, as recently released by the CDC. They compare these figures to excess death estimates from the same months in 2018 to establish a baseline. Since opioid overdoses typically rank as a leading killer among this demographic, they use 2018 opioid deaths as a point of comparison. As the authors then assert:

By implication, Covid has overtaken opioid overdoses as a leading killer among the young, thereby illustrating its risk to this age group. The national news media predictably bit at the story, and produced a flurry of articles announcing that young people face a higher Covid risk than conventionally thought. CBS News, for example, declared that “Young adults may think their age group isn’t at risk from COVID-19, but new research suggests that idea is dangerously mistaken.”

The JAMA study however contained a little-noticed caveat in a single sentence at the end of the article:

“Additionally, although COVID-19 deaths exceeded unintentional opioid deaths in 2018 in some areas, it is possible that simultaneous increases in opioid deaths may have occurred during the pandemic period, making it less clear which of these 2 diseases represents the current leading cause of death among younger adults in areas experiencing COVID-19 surges.”

The concession itself is stunning. If opioid overdose deaths are up compared to their 2018 baseline, they could explain the surge in excess deaths among young people rather than the speculated undercounting of Covid fatalities.

Opioid and other substance abuse problems have a well-documented connection to mental despair and economic downturns alike. The lockdown policies that have plagued the United States since the spring have unleashed their own mental health pandemic, in addition to destroying the national employment sector. It’s not unreasonable to conclude that younger people are among the hardest hit by these dual lockdown punches.

On December 18, just two days after the JAMA study came out, the Centers for Disease Control released preliminary data that strongly suggest the alternative explanation is correct. Substance abuse deaths including opioid overdoses have dramatically increased since the 2018 numbers that the JAMA article used as its baseline.

Furthermore, those already-increasing overdose deaths dramatically accelerated after the start of the lockdowns. The new CDC study shows this uptick across all measured categories of substance abuse deaths for April through June, the only months for which records are available as of this writing. In all likelihood, this pattern will continue when data are eventually made available for the summer and fall of 2020. 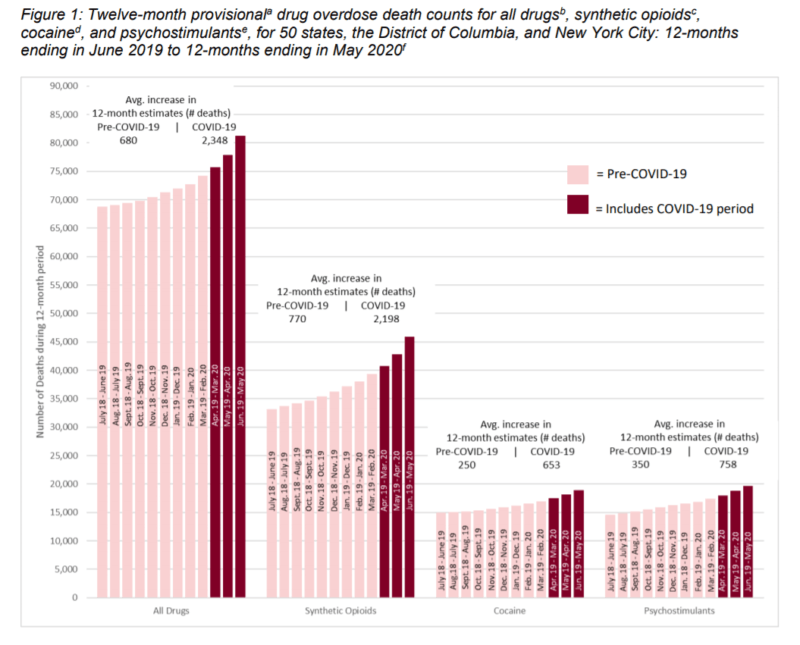 Although the CDC statistics do not break down these numbers by age, it is reasonable to assume that they heavily overlap with younger demographics in keeping with historical patterns from the ongoing problem of substance abuse. An unprecedented spike in overdose deaths, as well as other depression-related ailments such as suicides that were brought on by the lockdowns, accordingly emerge as the more plausible candidate for the excess death spike among young people compared to previous years.

Curiously, the authors of the JAMA article did not explore this alternative hypothesis in any depth beyond the single-sentence acknowledgement at the end of their article. Perhaps more revealing, the editors of the JAMA did not insist on any further investigation of this obvious and crucial complication to attributing excess deaths among the young to Covid itself.

Like so many instances before, another top medical journal has now contributed to the widespread dissemination of incomplete and misleading scientific inferences. Our news media then predictably seized on the same faulty conclusions and shoehorned them into a political narrative that confirmed their own pro-lockdown ideological commitments.

Meanwhile, the larger story of the substance abuse deaths that arise not from Covid but from the lockdown policies that they advocate gets lost amid the press’s hectoring of young people with exaggerated claims about the severity of pandemic deaths within their demographic.

Phil Magness is a Senior Research Fellow at the American Institute for Economic Research. He is the author of numerous works on economic history, taxation, economic inequality, the history of slavery, and education policy in the United States.