NASHVILLE, Tennesse –Before COVID even hit, the multi-talented Scarlett Burke was looking for a way to distribute her music on a new platform. The producer/actress/singer/songwriter was not interested in touring but was interested in sharing her music. 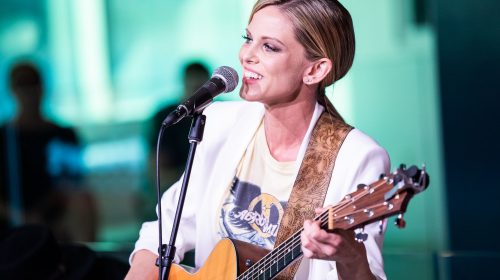 Alongside executive producer and award-winning country-music superstar Miranda Lambert, Burke co-created, directed and executive produced the original, scripted country music series: Make It Up As We Go. This first of its kind series from creators Audio Up CEO Jared Gutstadt and actor/songwriter Scarlett Burke was released through iHeartPodcast Networks on October 1, 2020.

I asked if Charlotte Sayles’s life mirrored her own and the answer is only partially. She and her character Sayles are both from Texas and they both write songs. But that is where the similarities end. In addition to songwriting, Burke is an accomplished actress and producer. She has composed music for some of the biggest campaigns in advertising, including Taco Bell’s Chasing Gold ad and Zillow.

Her scores have also been heard on countless Netflix, ABC, CBS, and Fox series. As an actor, she’s appeared on Showtime’s Ray Donovan, Lethal Weapon on Fox, and TNT’S Animal Kingdom.

Even though the podcast is fictional, it gives real glimpses of what may and often happens in the famous Nashville writers’ rooms. Not only that, she used real Nashville stars playing themselves and singing songs that she has written for the series. 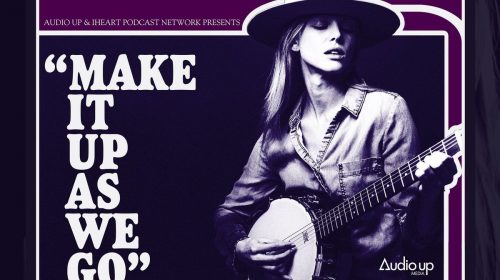 So far this year she has had acclaimed country music DJ, Bobby Bones, playing himself along with guest “appearances” from Lindsay Ell and Lambert. Tyler Rich is featured in a song that he wrote with Burke, “Breathe” for the podcast.

In addition to “Breathe”, Burke has written or co-written all the tracks that are featured. She also sings on every song except for “Workin’ Out” which is sung by Lindsay Ell.

Because the podcast is a musical, Burke can write/produce/sing on most every song without having to be on a stage.

Make It Up As We Go was never created as something for artists to do during the pandemic. However, it has turned out to be a blessing because it has allowed for actors/musicians to have a creative outlet while they safely allow listeners to be entertained.

Crazily, it is reminiscent of the early days, 100 years back when the family gathered around the radio and listened to the Grand Ole’ Opry or a drama like Mystery House. The only difference now is people can listen on their phones or on their homes’ virtual assistant devices.

“As a songwriter, we tell stories through our music and hope those songs find the right home, and our stories reach a listener,” reflected Burke.  “Creating this platform of being able to do both without the live component brings me hope for more creative control for songwriters and artists and that no matter your story or your style, there is an audience out there waiting for you. I wanted to capture the story of a woman in music as authentic as we could and all the challenges along the way to a win. I hope this series brings listeners to a place of experiencing the songwriting process as if they were in the room as we take them along the journey of how a song travels from writer to artist and finds its home.”

In what some would call serendipitous timing, Burke has successfully launched the first season of her innovative Make It Up As We Go podcast. Fans of the broadcast are already anticipating season two.

If the opportunity to make a TV arises, Burke would jump the chance.  Either way, music enthusiasts will love the characters, songs, and storylines that make Nashville’s music scene come to life.