The professor who resigned in 2019 after telling a local news outlet, “I am Antifa” just got a sizeable payout from the college that let him go.

As Campus Reform reported in August, Kirkwood Community College professor Jeff Klinzman posted on his personal social media messages in support of the far-left extremist group Antifa, which President Donald Trump was considering at the time labeling a domestic terror organization. When a local television station contacted Klinzman, he replied, “I affirm I am Antifa,” unleashing nationwide backlash eventually leading to the college making the “decision to remove” him from the classroom.

Klinzman indicated his intention to sue the school. The Foundation for Individual Rights in Education, which represented Klinzman, announced Monday that it reached a settlement with the college to avoid a First Amendment trial.

“Public colleges simply cannot fire professors because a small, vocal group of people online get upset,” FIRE said. “We are grateful that we were able to work with Kirkwood to resolve this matter and secure a good result for Jeff. Ultimately, this is a victory for Jeff.”

“More broadly,” FIRE added, “we hope that Jeff’s story will remind colleges that all of their professors have the right to express their political opinions online, and FIRE will be ready to act if colleges violate those expressive rights.”

According to FIRE, the college agreed to pay Klinzman,  an adjunct professor, $25,000, which is “approximately the amount it would have paid Klinzman to continue teaching for over three and a half years.”

While Klinzman will be paid for the equivalent of three years worth of work even while he is not employed by the college, he says his lawsuit was “never about money, but about protecting my right as a college faculty member to exercise extramural free speech.”

“I served my colleagues and students at Kirkwood for over 16 years, and wish the college had agreed to reinstate me. However, I am profoundly grateful to…FIRE who helped vindicate me by making sure the college had to pay a price for trampling on my free speech rights,” Klinzman said. 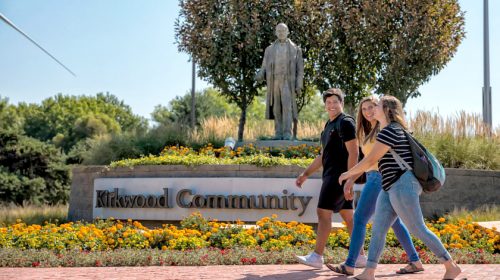 KCC told Campus Reform Monday regarding the settlement, “The college remains confident in how sensitive issues were managed related to his resignation at the beginning of the 2019-20 academic year. With this matter now settled, Kirkwood avoids potentially lengthy and costly litigation to defend itself and can keep its attention focused on educating students.”

“Kirkwood is pleased to put this matter behind the institution as it moves forward with its continued commitment to creating a learning environment where free speech and academic freedom can thrive,” the college added.

In August, though, the college’s president released a statement saying that Klinzman was not let go because of his viewpoints, but because of “the potential to create an environment that is disruptive to our mission.”

“Our decision to remove Mr. Klinzman from the classroom has nothing to do with the substance of his views or his right to express them. Rather, our decision is based solely on our commitment to fostering a safe learning environment for our students, faculty, and staff,” KCC President Lori Sundberg said.

FIRE is the same organization that in January came to the defense of the Massachusetts professor who joked that Iran should choose which American cultural targets to “bomb.” That professor’s comment came after President Donald Trump threatened to strike Iranian cultural sites if the regime targeted any Americans or American assets. The professor later apologized for his “bad attempt at humor.”