The book, called “Lonestar” — now available for its second printing on Indiegogo along with its sequel — is by Mike S. Miller, a comic book veteran of almost three decades, who has been crowdfunding his books for over a year with a great deal of success, raising more than $350,000 with more than 6,600 backers combined on the projects.

After building his audience on Indiegogo, Miller decided to give Kickstarter, which has a larger potential audience, a try. Initially, the project was approved on Sept. 27 until Miller says he started posting some of the artwork from the story, including the hero rescuing the woman from being mugged, and then suddenly he got a message from Kickstarter’s Trust and Safety saying the project was rejected on Oct. 2. 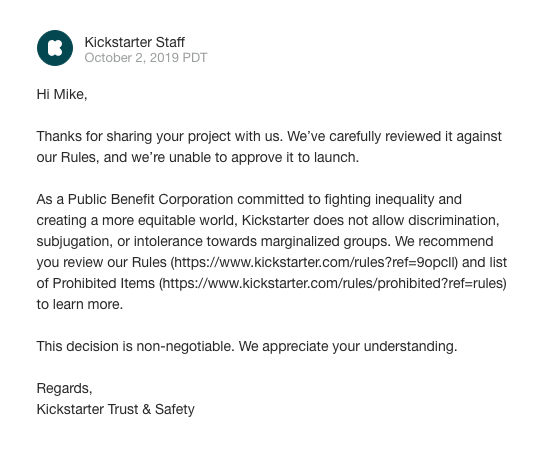 The letter read, “We’ve carefully reviewed it against our Rules, and we’re unable to approve it to launch. As a Public Benefit Corporation committed to fighting inequality and creating a more equitable world, Kickstarter does not allow discrimination, subjugation, or intolerance towards marginalized groups.”

Kickstarter told Miller to review the website’s rules and restrictions, which he says in a Youtube video he followed, and warned Miller that “This decision is non-negotiable.”

Miller fired back at Kickstarter on Twitter, writing, “Hey team @kickstarter, it’s nice to see that you consider MS-13 a ‘marginalized group’, since that’s the only people who were being ‘subjugated’ in the artwork I provided… More wokeness from the tech companies on display.”

It is mean-spirited political bias by Kickstarter, no question.

But here, Kickstarter’s decision in the name of protecting MS-13 is quite unbelievable. The Justice Department recently published a 90-page briefing on MS-13, a brutal Central American street gang, and its acts of violence, sexual assault, drug and human trafficking, “MS-13 in the Americas: How the World’s Most Notorious Gang Defies Logic, Resists Destruction.”

According to the Justice Department paper, the gang views itself as being in a “constant state of war”: “Violence is a major part of the glue that binds the MS-13. It is part of every stage of an MS-13 member’s life: potential members commit violent acts to be considered for membership and ultimately to gain entry; they are beaten into the gang in a ritual that has left more than one permanently scarred; they move up the gang ladder by ‘putting in the work’ and showing ‘commitment,’ euphemisms for committing violent acts in the name of the gang. Its rivalry with the Barrio 18 means the MS-13 is in a constant state of war. It is also facing down challenges from security forces. It operates amid potential informants. In this environment, commitment is not just a means to move up the ladder, it is about survival. It is not surprising, then that the gang has integrated this into its lexicon: Members are, as they say, soldiers.”

The briefing details the gruesomeness of the murders committed by MS-13: “In the MS-13, all members must do ‘missions,’ and during a mission, all members must participate. In some cases, this means repeatedly hacking a victim with a machete. Refusal means almost certain death since the member or aspiring member is a potential witness. The weapon of choice frequently is a knife, a machete or a baseball bat. The gang’s murder victims have signs of repeated blows and stab wounds, and are sometimes partially or completely dismembered. The authorities that inspected a scene in Long Island where two teenage girls were killed in 2016 with baseball bats, for example, told InSight Crime the victims looked like they had been run over by a car.”

Just in May and February, more gang members were indicted by the Justice Department on kidnapping-murders, including the brutal slayings of two Virginia juveniles who were thought by the killers to be rival gang members in the February case.

This is what Kickstarter thinks is a “marginalized group”? By their logic, any standard crime drama that depicts gang violence on primetime or the Emmy Award-winning series, “Breaking Bad,” which in part depicted Mexican drug cartels and their gang enforcers who murder children, would be ineligible for funding on Kickstarter because, in its apparent view, the gangs were not bloodthirsty murderers who dismember their victims, they were actually the victims being discriminated against. Meanwhile, back in reality, it is not unsurprising gangs would find their way into a comic book to be portrayed as villains.

Miller, for his part, is a devout Christian and political conservative, and a supporter of President Donald Trump, who he says inspired him to leave mainstream comics where he drew art for DC, Marvel and Image over his career in a July 24 interview with fellow comic creator Jason Brubaker. “A couple of years ago this blonde fellow [Trump] got elected President, and it gave me this surge of hope again that I could actually do something,” Miller said.

Miller explained, “I’ve been writing, I never stopped creating, so I’ve been creating stuff for 30 years and… having been a publisher, I was like, there’s no hope for starting another publishing company because it’s insane, but I had all this content, all these … intellectual properties, movie treatments, you know, drawings and all this stuff that I’ve just done over the years and I’m like, um, when I had that burst of hope I’m like I gotta do something with this. I sat down and I wrote out a white paper on Blacklist Comics.” Blacklist is the name of Miller’s publishing imprint.

Reached for contact on Twitter, Miller wrote, “I had been intending on building my own company for a while, my business model simply changed when the crowd funding aspect became so viable via influencer marketing through YouTube… [But with Trump] I had hope for the future I hadn’t felt in a decade. It was then I decided to get to work on my plan.”

Then, Miller said he got a call from fellow comic book veteran, Ethan Van Sciver, who encouraged him to put his projects on Indiegogo: “He was making all this money on Youtube, and he’s like, dude, you know, get your Youtube channel up and started, up and going, and I’m like, okay, and I started doing my Youtube channel, and he’s like the secret is you got to do stuff every day, and I’m like, well, it’s not growing exponentially fast and I’m not as entertaining as some, but Ethan had launched his Indiegogo and he brings me on this big celebratory hangout where he had just, he was wrapping up his first month I think and he had made $400,000.”

Miller continued, “He and this guy, Richard [C. Meyer], who at the time was known as Diversity & Comics, they had a proven business model. So I continued to grow my Youtube channel, you know it wasn’t huge when I first launched my first campaign… I had about 1,000 subs, which was a thousand more people I talk to everyday than before, and I ended up by the time I closed that campaign, I think I had 3,000 subs and I had made $113,000 on my book and I was like, okay… this is making indie comics a reality.”

Miller added, “I mean, the guys on Indiegogo… we are the highest paid artists in the comic book industry… [In mainstream comics,] the grind of having to get five pages done a week to pay your mortgage and you’re still broke. Comics do not pay. They are great training ground. You learn all the necessary skills for storytelling and layout and structure and all that stuff… but the pay is garbage.”

Brubaker asked Miller if he would ever return to mainstream comics and he said, “No, not a chance… they couldn’t afford me now.”

That is a real story of the American dream, of creators who have bravely set out on their own and created small businesses, where venues like Indiegogo or Kickstarter are indispensable to raising funds.

Similar discrimination by Kickstarter occurred against Miller’s colleagues, Richard C. Meyer and Jon Malin for their graphic novel, “Jawbreakers,” in 2018, depicting a military group of ex-superheroes turned mercenaries, which prompted them to go to Indiegogo instead, where it has grossed a combined $627,000 for its first two offerings (Aaron Alfeche came on to draw the sequel while Malin went to work on other projects).

The connection is Meyer, Miller, Van Sciver, whose “Cyberfrog” has netted more than $932,000 in four offerings, and Malin, whose “Graveyard Shift” has raised more than $280,000 in two offerings — who all come from differing backgrounds and do not necessarily see eye to eye on all issues political and cultural — are all outspoken critics of the comic book industry they say has become too biased and saturated with a diversity-driven political agenda being run by social justice warriors. Apparently, so has Kickstarter.

If big tech platforms want to, they can exert political and cultural bias, and suppress small businesses’ exposure when they speak out against it. If it were done on account of race, sex or religion, these would be clear cut civil rights violations, but members of Congress have not yet extended public accommodations civil rights laws to cover political, philosophical or cultural views. But, with repeated deplatforming of conservatives and other independent thinkers on Facebook, Twitter, Youtube and other venues, threatening a social tyranny in the U.S. of thought police, maybe they should.

Robert Romano is the Vice President of Public Policy at Americans for Limited Government and in another life would have gone to comic book school.