In an email sent to his fellow Republicans in the State House, Rep. Mark Hall (R-Cleveland) announced his bid for Majority Whip, a position currently held by Rep. Rick Tillis (R-Lewisburg).

Hall, who was a Bradley County Commissioner for 12 years and had an impressive outing during the 2018 Republican primary taking 54 percent of the vote in a four-way race, never mentioned Tillis in his announcement.

Tillis, currently in his second term, was chosen as the Majority Whip during the November 2018 House Republican Caucus elections with 43 votes over his conservative opponent Rep. Tim Rudd (R-Murfreesboro).

“After much prayer and deliberation,” Hall wrote to his fellow House Republican members, “I have decided to announce my bid for Majority Whip.”

Hall explained, presumably alluding to the very difficult decision the Republican Caucus faced in May with a no-confidence vote for current House Speaker Glen Casada (R-Franklin), “With all of the difficult times we have just been through, I believe we need a strong leader who will bring unity and direction to the caucus.”

“With my experience in the military and running a successful business, I believe that I have what it takes to lead this body,” said the U.S. Marine Corps veteran and long-time barber shop owner.

“I believe that the Caucus can be a powerful force for good if we are united and working together as a team. There has been too much infighting, for too long.”

While a lot of attention has been paid to the Casada situation, during much of the 2019 legislative session another force was at work, anonymously taking to Twitter under the handle @CHBmole.

For about three months, @CHBmole – implying insider status at the Cordell Hull Building, home of the Tennessee Legislature since 2017 – targeted lawmakers, mainly Republicans, as well as legislative and administrative staffers.

While it is not uncommon for public figures to be the subject of political attacks, most believe employees and family members are off limits.

Eventually, just as the account was deactivated, the anonymous operator of the account was outed as Rep. Tillis by fellow State Rep. Andy Holt (R-Dresden), The Tennessee Star reported.

Tillis later denied to The Star that he is @CHBmole, though Holt said Tillis admitted it to him in a telephone conversation.

For the past several months, Tillis has appeared to go on with impunity by both the House Republican Caucus and legislative administration.

Apparently, some of the current leadership of the Republican Caucus is not necessarily supportive of Hall’s announcement to run as Majority Whip.

It is unclear if that is because they favor Tillis continuing in the role or if it is because it could put candidates running for Speaker in the position of having to step down from their current leadership roles if they were also challenged. 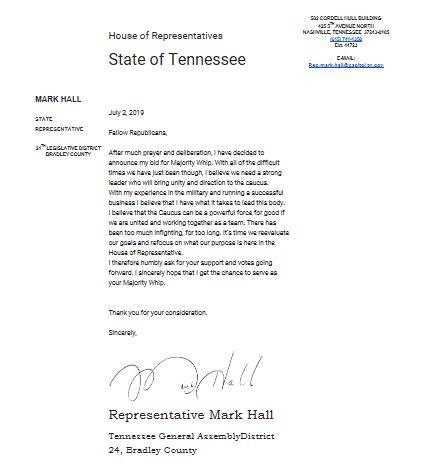 For instance, Caucus Chair Cameron Sexton (R-Crossville) has announced his intention to run as Speaker, which wouldn’t necessarily jeopardize his current position by default, unless he should receive a challenger.

The largely ceremonial position of Speaker Pro Tempore is held by Bill Dunn (R-Knoxville), but it is unclear whether he will actively pursue the role of Speaker, even though he is next in line for the position.

The role of Deputy Speaker, currently held by candidate for Speaker Matthew Hill (R-Jonesborough), is appointed by the Speaker rather than elected by the Caucus. It is possible that Hill would be replaced as Deputy Speaker should he not be elected Speaker, so, unlike some other candidates, he has nothing to lose by running for Speaker.

Majority Leader William Lamberth (R-Portland) has said he has no plan to run for Speaker.

While the stated intent of the upcoming House Republican Caucus meeting is for the sole purpose of selecting the nominee for Speaker, with a two-thirds vote by the Republican membership other elections could also be held.

Hall, by taking the lead in making his announcement, just may open up the field for additional candidates to run for other House Republican leadership positions.

The House Republican Caucus meeting is scheduled for 9 a.m. on July 24, although a location has yet to be announced.

The full text of Representative Mark Hall’s announcement bid for Majority Whip can be read below:

After much prayer and deliberation, I have decided to announce my bid for Majority Whip. With all of the difficult times we have just been though, I believe we need a strong leader who will bring unity and direction to the caucus.

With my experience in the military and running a successful business I believe that I have what it takes to lead this body.

I believe that the Caucus can be a powerful force for good if we are united and working together as a team. There has been too much infighting, for too long. It’s time we reevaluate our goals and refocus on what our purpose is here in the House of Representative.

I therefore humbly ask for your support and votes going forward. I sincerely hope that I get the chance to serve as your Majority Whip.

Thank you for your consideration.

Laura Baigert is a senior reporter at The Tennessee Star.
Photo “Mark Hall” by Mark Hall.