Despite the fact that both Tennessee State law and the Metro Davidson County Charter require a balanced budget, current Metro Council district member and At-Large candidate Steve Glover believes that the budget submitted by Mayor David Briley and recently passed by the Metro Council violates those provisions. As a result, Glover has asked State Senator Farrell Haile (R-Gallatin) to request an opinion from Tennessee State Attorney General Herbert H. Slatery concerning the legality of that budget.

The 2019 – 2020 Davidson County budget was presented by Mayor Briley to the Metro Nashville City Council and was adopted on 19 June, 2019. Glover points out that the budget relies upon revenue sources that have not yet been approved by the Metro Council.

“It is pretty obvious that you can’t ‘balance’ a budget with a revenue stream that doesn’t currently exist,” Councilman Glover said. “It’s like telling your bank they shouldn’t bounce your checks this week because you plan to deposit money into the account next week. That’s nonsense.”

Councilman Glover notes, “Mayor Briley’s budget included the sale of public assets including, but not limited too, the management of city-owned parking meters. It is my opinion these funds are in question because on May 3, 2019 Chancellor Ellen Hobbs Lyle ruled the Mayor’s office may not have complied with fair bidding practices. Further, on 31 May, 2019 Mayor Briley, by his own action, publicly put the parking meter proposal “on hold”, leaving a greater than $30 million deficit in the Metropolitan Nashville Operational budget.”

Glover also points out: “There is no guarantee Mayor Briley will win re-election nor that the next Metro Council will pass the parking meter privatization plan, or that the Parking commission would even approve a transfer of management for the city’s parking meters. They are claiming to balance the budget with funds that don’t yet exist and that is not what the law requires.”

“I am pleased that State Senator Farrell Haile, as one of our elected state officials, has agreed to my request that he seek a formal state Attorney General opinion on whether or not a city or county budget can be considered balanced as required by law, if it includes funds that have not yet been approved by the governing legislative body.” Glover said. 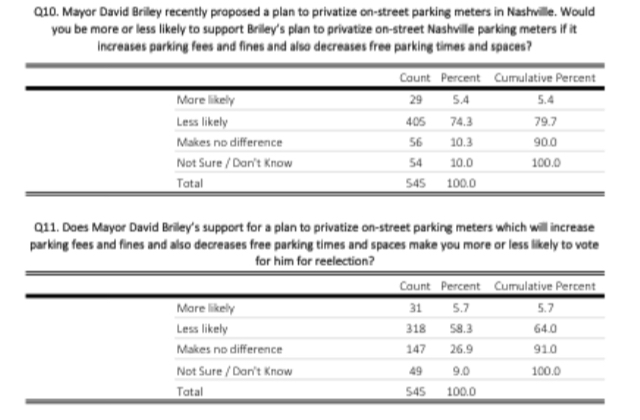 While Glover could have sought an opinion from the Metro legal department, those attorneys would be conflicted by their relationship and employment by the City and any opinion issued would be suspect. The timeline for a response from the Tennessee Attorney General is not known, but will likely come after the elections on August 1.

Tennessee Star Political Editor Steve Gill says it is obvious that neither Briley nor the Metro Council wanted to embrace the parking meter plan that voters strongly oppose just prior to an election. “They needed the money to balance the budget but didn’t want the heat from passing the plan needed to generate that money,” Gill notes. “So they have simply ‘pretended’ that it is available in order to get past the election. Faced with the options of passing the unpopular parking meter scheme or an equally unpopular tax increase on the eve of an election, City officials chose to engage in ‘smoke and mirrors’ to pass what is almost certainly an illegal budget package.”

A Tennessee Star/Triton poll released last week showed that over 74% of likely Davidson County voters opposed the privatization of parking meters plan that Briley proposed, and then “paused,” earlier this year.  58% indicated that they were less likely to vote for Briley because of that plan. A Tennessee Star/Triton poll on that issue in April showed almost identical results.

Like Glover, Nashville Mayoral candidate Carol Swain has been critical of the parking meter privatization plan and stated that it will be “dead on arrival” if she is elected Mayor.